Netanyahu: “This is the correct, worthy and courageous position that others should follow." 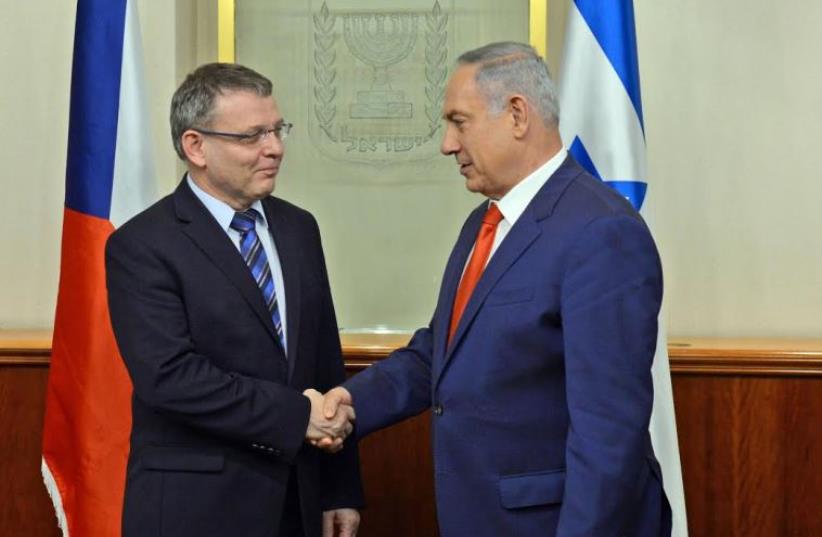 Prime Minister Benjamin Netanyahu and Czech Foreign Minister Lubomie Zaoralek.
(photo credit: GPO)
Advertisement
Prime Minister Benjamin Netanyahu hailed a resolution passed on Tuesday by the lower house of the Czech parliament that slammed the recent anti-Israel UNESCO resolution and which called on the Czech government to promote “respect” for Jerusalem as the capital of Israel.“This is the correct, worthy and courageous position that others should follow,” he said.“This is a strong statement,” Ambassador to Czech Republic Daniel Meron said on Wednesday. “It is the only parliament that has come out so strongly against the UNESCO resolution, and against the way UNESCO treats the issue of Jerusalem.”Israel’s Ambassador to UNESCO, Carmel Shama-Hacohen, characterized the resolution as “another welcome resolution and another reasonable voice” against “delusional” resolutions about Israel. “This is indeed a nice present from Prague to Israel on Jerusalem Day.”Last month UNESCO passed a resolution by a vote of 22-10, with 23 abstentions and three countries not voting, that denied Israel’s sovereignty over the city.The nonbinding resolution in the Czech parliament, comparable to Sense of Congress resolutions in the US designed to make a point or send a message, called upon the government to promote “respect” for Jerusalem as Israel’s capital, direct negotiations between Israel and the Palestinians without preconditions, and support a two state solution.One diplomatic official pointed out that “respect” for Jerusalem as Israel’s capital is not the same as recognition.The resolution also called upon the government to oppose actions in international organizations and the European Union that “distort historical facts and which are imbued with the spirit of hatred of Israel.”The Czech Republic is a member of the EU.The resolution passed by a vote of 112-2, with only two Communist parliamentarians voting against. It rejected the “continuing biased and antagonistic approach of UNESCO toward one of its member states, as well as improper politicization of this organization, clearly overstepping its mandate.”Another part of the resolution called for the Czech Republic to withhold its funding to UNESCO this year, which amounts to about $1.2 million, but diplomatic sources said it was highly unlikely this would be adopted by the government.Meron said that Israel has a “special relationship” with the Czech Republic – one of the friendliest countries in Europe toward Israel – that goes back to when Czechoslovakia’s founder and first President Tomas Masaryk was the first foreign leader to visit the Jewish Community in Mandatory Palestine 90 years ago.Masaryk’s son, Jan, was instrumental as the Czech foreign minister 70 years ago in giving the green light for the transfer of Czech arms to Israel, something that played a significant part in Israel’s victory in the War of Independence.The country’s warm relationship toward Israel came out clearly, Meron said, in a gala event held Tuesday night in the historic St. Vitus Cathedral in the Prague Castle in honor of Jerusalem Day.Czech President Milos Zeman, in a written message to the gathering that attracted several hundred people, referenced the “helping hand” his country gave Israel in the 1948 war.“And in exchange, Israel with its vitality and pride encourages us in Europe where we face the evil of terrorism,” he said.This was not the first time the Czech Chamber of Deputies denounced an anti-Israel UNESCO resolution, having done so in October of 2016 when the organization passed an earlier resolution attempting to expunge Jewish ties to the Temple Mount.