Some in Jewish community condemn backlash as Islamophobic.

British muslims pray during Friday prayer at the East London mosque.
(photo credit: ODD ANDERSEN / AFP)
Advertisement
A plan to convert a former iconic music venue in London into a mosque and Islamic community center has been met with harsh criticism.In July, the charity Center for Islamic Enlightening bought the Golders Green Hippodrome, located in a neighborhood with a large Jewish population, and it is now seeking the local council’s permission to turn the building, which is restricted to certain uses, into a mosque.Whereas planning permission has already been granted for developers seeking to convert the property into a church, other uses such as a mosque or synagogue are not currently permitted.The charity has therefore submitted a request to Barnet Council to alter the wording of the planning permission from “church” to “a place of worship.”The venue, formerly home to the BBC Concert Orchestra and host to British television, music and theater for nearly a century, has struggled to find a permanent owner since its closure in 2004.A campaign, titled “Golders Green Together,” has been launched by opponents of the plan. A petition against the plan has been signed by 4,000 people, and the local council’s website has received more than 200 written objections to the planning application. 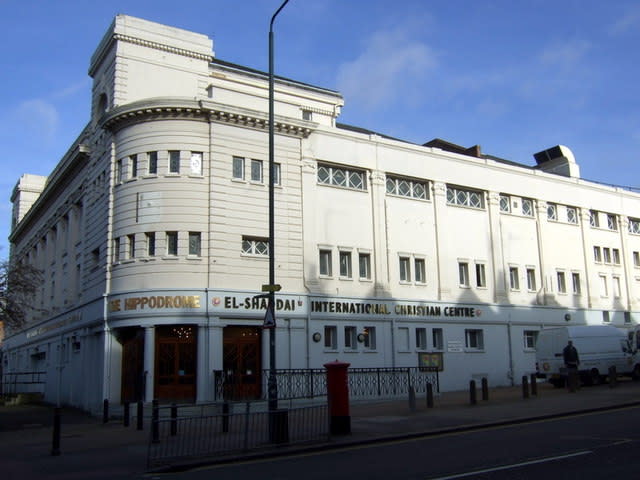 The Golders Green Hippodrome (Wikimedia Commons)
Whereas some critics of the proposed mosque highlighted their concerns over increased traffic, local hospital access and late night noise, others took issue with the increased presence of Muslims in the area.“I am positively terrified of the influx of imposing and threatening- looking visitors who frequent the center. They are preaching hatred of all non-believers and especially of Jews!” said one petition respondent who chose to remain anonymous.Another respondent, Josephine Bacon, said: “To place a large Muslim institution in the heart of one of London’s only two Jewish communities is a highly dangerous undertaking and one that can only result in violence and terrorism.”Wrote Rachelle Marks, “The appearance of burkas [and] veils has changed the area... the traffic is too much and we don’t know what they are preaching as [it is] all in Arabic.”Writing on the campaign’s Facebook page, Robert Sur wrote: “Why not just be honest and tell them the real reason why we don’t want a mosque there. Because it’s the one of the only jewish areas left in London and we don’t want it polluted and destroyed by a bunch of jew hating muslim terrorists.”The campaign has been criticized by some in the Jewish community as Islamophobic.Jay Stoll, a Jewish political adviser in the British Parliament, ran a campaign in 2015 under the same title, “Golders Green Together,” to promote diversity ahead of a neo-Nazi protest in the area.Stoll expressed his disappointment, saying, “Two years ago I ran a campaign called ‘Golders Green Together’ to protest neo-Nazis demonstrating in the most populous Jewish area of the UK. [Very] disappointed to see the same slogan used to protest planning permission for a mosque. Hardly representative of the campaign we ran.”Marcus Dysch, political editor at the Jewish Chronicle, wrote on Twitter that it was “hard to see [the campaign] as anything other than inexcusable, blatant Islamophobia. An embarrassment to British Jews.”Another Jewish resident of London, Steve Weller, said, “This is dreadful and full of hatred and Islamophobia from the people complaining. Imagine what they would be saying if the roles were reversed?” More than 150 respondents have submitted their support for the application, many praising the prospect of the building being put to good use.In September, representatives of the Islamic center expressed their hope to engage with other faith communities in the area.A spokesman for the center said: “This is a great move for us and we are very pleased and excited to be in Golders Green in such a diverse area... We will be reaching out to the local churches and synagogues so we can build strong ties with the community.”Ahmed al-Kazemi, the Islamic charity’s PR officer, told London weekly newspaper Ham & High that the acquisition, purchased at auction for £5.25 million, was a dream come true: “To get such a wonderful building in a location like Golders Green, it is a huge change for the Shia community. We were based in a warehouse before, but now we have a proper building which we can use to hold conferences, seminars, and our community activities.“So many of our neighbors are already excited for the business and sense of community the center will bring to the area. We are hoping to run many programs in the future for men, women, children including a nursery and Arabic school,” Kazemi said.