Pomsel insisted to The Guardian that her role in the Nazi propaganda department was "just another job" and that she had no interest in "clearing [her] conscience." 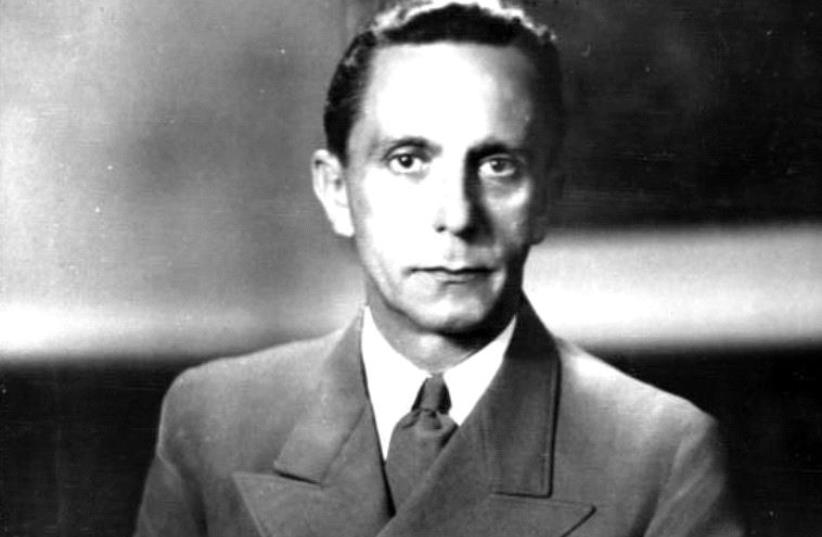 Joseph Goebbels
(photo credit: BUNDESARCHIV BILD 183-1989-0821-502 / CC-BY-SA 3.0)
Advertisement
It would be an exaggeration to say that Brunhilde Pomsel, now 105, "comes clean" in The Guardian's Monday evening exposé. In fact, the woman who was once Joseph Goebbels' secretary, and is now the last surviving member of the Nazi leadership's "inner circle," hardly admits to any involvement at all in her employer's infamous role in Hitler's regime.In her conversations with The Guardian, she recalled in vivid detail Goebbels' manicured hands and the stylish suit she once received as a gift from Magda, Goebbels' wife, but steadfastly insisted her ignorance in all other matters, to the point that she bragged about turning a blind eye when ordered. For instance, when handed the case file of the resistance activist and student Sophie Scholl, who was executed for high treason in February 1943 for handing out anti-war leaflets at the University of Munich, Pomsel said, “I was told by one of Goebbels’ special advisers to put it in the safe, and not to look at it. So I didn’t, and was quite pleased with myself that he trusted me, and that my keenness to honor that trust was stronger than my curiosity to open that file.”Among Pomsel's duties were reporting fallen soldier statistics and "exaggerating the number of rapes of German women by the Red Army," but she insisted that her role in the Nazi propaganda department was "just another job" and that she had no interest in "clearing [her] conscience."The Guardian reports Pomsel's demeanor as being void of guilt, as she explained, "Those people nowadays who say they would have stood up against the Nazis – I believe they are sincere in meaning that, but believe me, most of them wouldn’t have.” After the Nazis rose in power, “the whole country was as if under a kind of a spell."When the Russians entered Berlin, she was captured and served five years in Russian prison camps near Berlin, which she called "no bed of roses."It wasn't until her release that Pomsel learned of the Holocaust, which she called "the matter of the Jews," and it wasn't until another 60 years passed before she decided to look into Eva Löwenthal, a red-haired Jewish woman who had once been her school friend. Pomsel visited the Holocaust memorial in Munich, and found Löwenthal's name at the information center. Departed to Auschwitz in November 1943, declared dead there in 1945.“I know no one ever believes us nowadays – everyone thinks we knew everything. We knew nothing, it was all kept well secret,” she told The Guardian. She said she had believed that the Jews who had disappeared, such as Eva, had been relocated to villages in territories that needed to be repopulated. “We believed it – we swallowed it – it seemed entirely plausible,” she said.