Lego provided their followers with photos displaying an exclusive look at the creation and manufacturing process behind the visor, as well as a sneak-peak as to what the final product looks like. 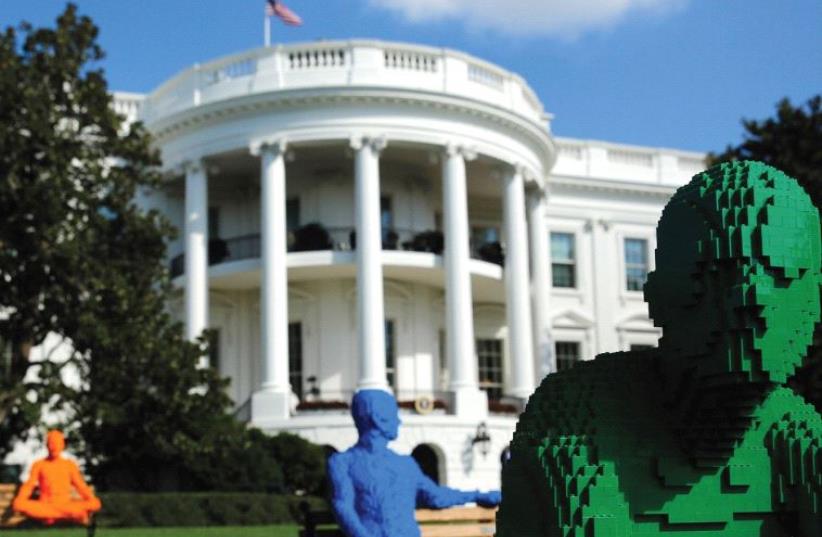 BUILDING BLOCKS of the next US policy in the Middle East? LEGO statues on park benches in the South Lawn of the White House in Washington DC.
(photo credit: REUTERS)
Advertisement
Lego has moved from making their signature interlocking plastic building blocks to manufacturing over 13,000 protective visors a day for Danish healthcare workers - doing their part to assist in the fight against the coronavirus spread.
The company's base in Billund, Demark, put forth their efforts this week to create special molds, normally used for their play materials, into templates for the medical visors to be distributed around the country. Around 100 employees were involved in the project, according to Lego.
"This week we began to make visors at our factory in Billund for healthcare workers on the frontline in Denmark. We are so incredibly proud of the team who made this happen," Lego wrote on its official Instagram page. "They worked around the clock to create designs and make molds that can produce more than 13,000 visors a day. We are grateful to have such talented, dedicated and caring colleagues."
Lego provided their followers with photos displaying an exclusive look at the creation and manufacturing process behind the visor, as well as a sneak-peak as to what the final product looks like upon completion.
"A few weeks ago a colleague in our incredibly creative Engineering department heard that there was a desperate need for safety equipment for COVID-19 in Denmark," Lego said, according to ABC News. "He approached the rest of his team with his idea for a visor and they started to trial production ideas... We are so incredibly proud of the team who made this happen."
Lego recently donated 500,000 lego sets and $50 million dollars to children in need in response to the coronavirus spread. The monetary donation was awarded to the charity Education Can't Wait, which specializes in providing education to children in times of crisis.