Liberman, after leak: We’ve changed how we share intel 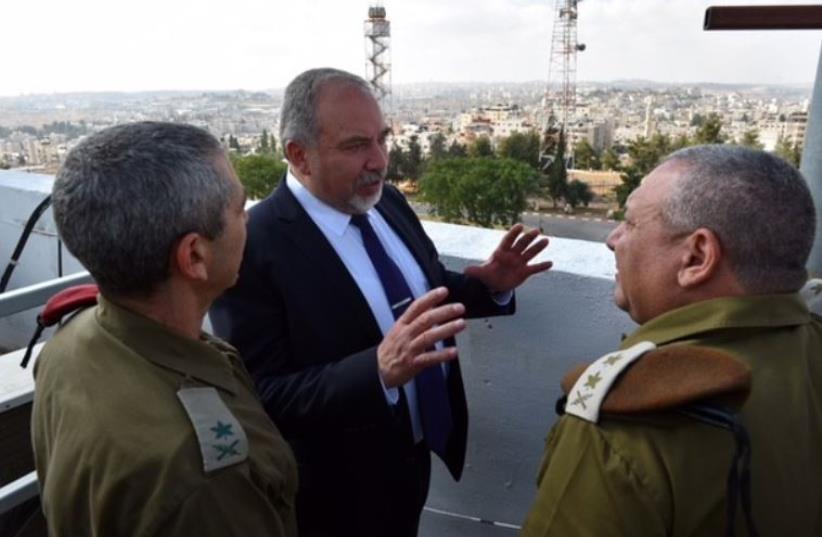 Defense Minister Avigdor Liberman (C) speaks to OC Southern Command Maj.-Gen. Roni Nume (L) and IDF Chief of Staff Lt.-Gen Gadi Eisenkot (R)
(photo credit: ARIEL HERMONI / DEFENSE MINISTRY)
Advertisement
Israel has changed its intelligence sharing apparatus after US President Donald Trump disclosed classified information to Russian officials, Defense Minister Avigdor Liberman said on Wednesday.Liberman, speaking on Army Radio, said that while “this is not an issue we should discuss on the radio; there are some things that are discussed in closed rooms,” Israel has since made a “small change” to its intelligence-sharing apparatus. Our “intelligence cooperation with the United States is unprecedented,” he added.On May 10, Trump met at the White House with Russia’s Foreign Minister Sergei Lavrov and Ambassador Sergei Kislyak, and is reported to have leaked Israeli intelligence on the activities of Islamic State in Syria.“We looked into it and cleared the air on the entire issue, and there is no need to continue to focus on it,” Liberman said in an apparent reference to the leak, adding that “what we had to clarify with our friends in the United States, we did. We did our checks.”On Monday, following a joint press conference in Jerusalem with Prime Minister Benjamin Netanyahu, Trump said that he “never mentioned the word or the name Israel” during his meeting with the Russian officials.Liberman also said that he was concerned by an enormous arms deal US President Donald Trump signed with Saudi Arabia last week.“I’m not at peace with the arms race in the Middle East. The arms sales in the region have reached $215 billion and this is no small sum,” he said, pointing to other countries in the region, such as Qatar and the United Arab Emirates and Iran, which have made some “non-negligible” arms purchases.The defense minister said that he spent three hours with Trump’s National Security Adviser H.R. McMaster during Trump’s visit to Israel this week and discussed this deal with him.And while the purchases “don’t sit well with me, we are nonetheless following developments and have ways of dealing with this,” Liberman said.According to a February report by Stockholm International Peace Research Institute, arms imports to the Middle East jumped by 86% between 2012 and 2016, accounting for 29% of global arms purchases, an increase of almost double from the previous five-year period studied. Saudi Arabia was the world’s second-largest arms importer (after India) with an increase of 212% compared to the previous five-year period, and imports by Qatar went up by 245%.In the deal aimed at supporting the Sunni kingdom in the face of Iranian and Iranian-related threats, Riyadh signed contracts to receive arms worth $110 billion effective immediately, plus military equipment worth at least another $350 billion over the next 10 years.According to the State Department, the wide-ranging deal will cover border security and counterterrorism, maritime and coastal security, air and missile defense systems as well as cybersecurity and communications technology.While Prime Minister Benjamin Netanyahu has voiced his wish to improve ties with Saudi Arabia and other Gulf states, several officials also voiced their concern about the sales, including National Infrastructure, Energy and Water Minister Yuval Steinitz, who said that the deal “is a matter that really should trouble us.“Saudi Arabia is a hostile country and we must ensure that Israel’s qualitative military edge is preserved. Hundreds of millions of dollars in weapons deals is something we should receive explanations about,” he said.