Libya is now in focus for providing a haven for jihadists and exporting extremist volunteers and terrorist networks. 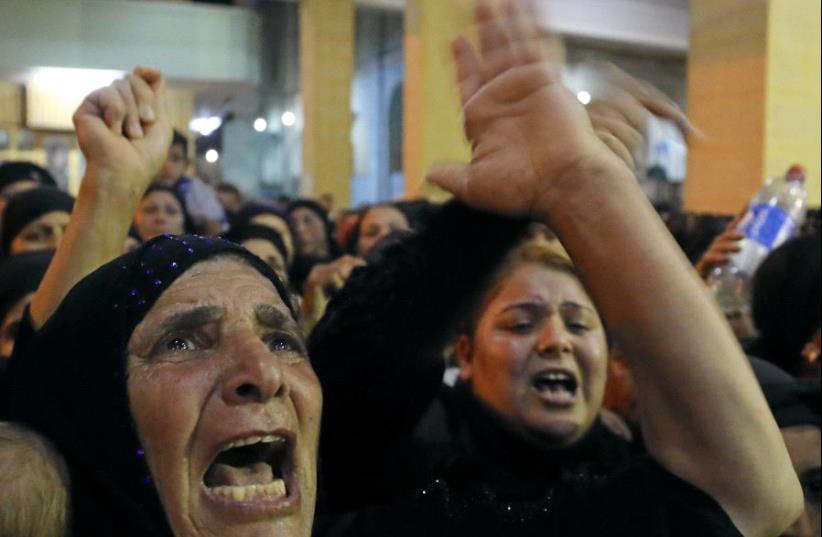 Relatives of victims of an attack that killed at least 28 Coptic Christians on Friday react at the funeral in Minya, Egypt May 26, 2017.
(photo credit: REUTERS/MOHAMED ABD EL GHANY)
Advertisement
As the sun was setting in Derna in Libya on Friday, Egyptian warplanes struck six sites around the city. Photos showed plumes of smoke. The air strikes came 10 hours after Islamist terrorists attacked a bus of Coptic Christians, murdering 29 people on the way to a monastery south of Cairo. At the same time, investigators in the UK are probing the Manchester terrorist’s Libya connections after an attack last week killed 22 and critically wounded dozens. Libya is now in focus for providing a haven for jihadists and exporting extremist volunteers and terrorist networks.On May 23, Libyan government forces in Tripoli arrested Hashem Abedi, the brother of Manchester bomber Salman Abedi. His father was also detained. We now know that Salman Abedi flew to Libya on April 19 and stayed for almost a month and flew back to the UK via Düsseldorf in Germany. According to a Libyan source who spoke with reporters on Saturday, he called his brother in Libya just minutes prior to the attack. The UK has arrested almost a dozen people in the wake of the attack, which points to a sophisticated network.Libya has proven a toxic recruitment ground for jihadists. Quentin Sommerville, a BBC reporter, noted that 3,500 Libyans left the country to fight in Syria after 2013. Aaron Zelin at the Washington Institute for Near East Policy wrote that ISIS in Libya also recruited foreign fighters to participate in their attacks. Around 2,000 joined and some have returned from Libya. “Beyond protecting Europe, US and EU officials should also ensure that their allies in East and West Africa are prepared to handle returnees from Libya,” Zelin wrote in a recent analysis.Egyptian President Abdul Fattah al-Sisi ordered the bombing of training camps in Libya after the attack in Egypt. In a televised address Friday, he said Egypt would “not hesitate to strike terrorist camps anywhere.” Egypt last struck Libya in 2015, after ISIS beheaded Coptic Christians it kidnapped in Sirte. ISIS has targeted Copts in recent attacks in Sinai, as well as in Alexandria and Tanta on Palm Sunday in April. Sisi has encouraged the US to stand behind Egypt’s anti-terrorism campaign, and he hopes to receive support after President Donald Trump’s Riyadh speech. Sisi has viewed Libya as a security threat to Egypt since his days as commander in chief of the armed forces in 2012, and he said in his recent address that more than 1,000 terrorist vehicles had been destroyed attempting to cross from Libya to Egypt in the last two years.Libya presents a complex mosaic for policy-makers in Cairo, the UK or elsewhere. In western Libya, based in Tripoli, the UN-backed Government of the National Accord fights battles with rival militias, while Field Marshal Khalifa Haftar’s Libya National Army runs eastern Libya from Benghazi. Cairo is close with Haftar. In mid-May, Egyptian Armed Forces Chief of Staff Lt.-Gen. Mahmoud Hijazi flew to Benghazi for discussions about fighting terrorism.Questions remain, however, about the efficacy of Egypt’s air strikes in Derna. ISIS has claimed responsibility for the murderous bus attack. Commentators, such as The Times of London’s Bel Trew, point out that ISIS is not present in Derna, and Egyptian TV has said the air strike hit the Shura Council of Mujahideen, a separate extremist group. This means Cairo wants to press ahead with a general struggle against various terrorist and jihadist groups in Libya, in cooperation with Haftar. Meanwhile, the UK’s interest in Libya is more narrow, but voices such as journalist Paul Mason argue that the Libya connection showed “Theresa May has failed on terror.” Ahead of a general election in the UK, that means there will be focus on if tighter anti-terrorism controls, specifically focused on Libya, are necessary. Tracking young men flying from Libya to the West will likely be a start.