Monday's blast on board a metro train in Russia's second-largest city killed 11 people and wounded 45; Russian media reports have said that the incident was caused by a suicide bomber. 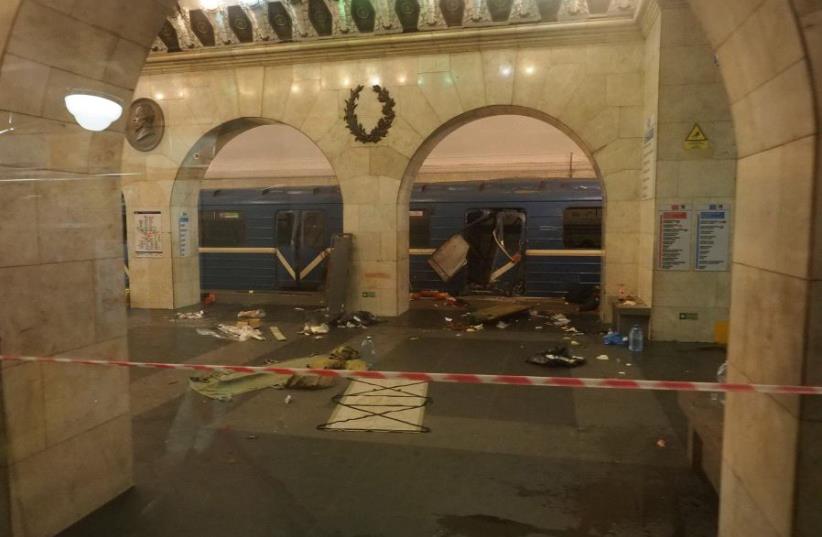 A train carriage damaged from an explosion, is seen at Tekhnologicheskiy institut metro station in St. Petersburg, Russia April 3, 2017
(photo credit: REUTERS)
Advertisement
The likely suspect in a deadly blast in the Russian city of St. Petersburg is a Kyrgyz-born Russian citizen, Kyrgyzstan's security service said on Tuesday.A spokesman for the GKNB security service identified the suspect as Akbarzhon Jalilov, born in the city of Osh in 1995. He provided no other details.
Amateur video shows train doors in St.Petersburg metro ripped by blast (Credit VK.COM/SPB_TODAY)
Kyrgyzstan, a predominantly Muslim Central Asian nation of six million, is Russia's close political ally and hosts a Russian military airbase.Monday's blast on board a metro train in St. Petersburg killed 11 people and wounded 45. Russia's Interfax news agency cited a law enforcement source as saying the blast was caused by a suicide bomber. Russian President Vladimir Putin, who was in the city when the blast struck, visited the scene of the explosion late on Monday night and laid a bunch of red flowers at a makeshift shrine to the victims.Credit: ReutersThere was no immediate claim of responsibility. Officials said they were treating the blast as an act of terrorism, but there was no official confirmation of any link to Islamist radicals.Earlier, Russian media broadcast closed circuit television footage of a bearded man they said was being sought by police as a suspect. However, Interfax reported that the man had come forward and been eliminated from inquiries.Prime Minister Benjamin Netanyahu expressed his condolence to Russia in the wake of the attack, and said that Israel stood in solidarity with Russia.US President Donald Trump also offered his condolences to Putin in a phone call late on Monday, the White House said in a statement, offering the support of the US government. The two leaders "agreed that terrorism must be decisively and quickly defeated," the statement said.In addition, China condemned the attack, with Foreign Minister Wang Yi offering condolences and support in a statement that said "China resolutely opposed all types of terrorism."Jpost.com Staff contributed to this report.