Lone wolf gunmen, not ISIS, responsible for terror in Texas 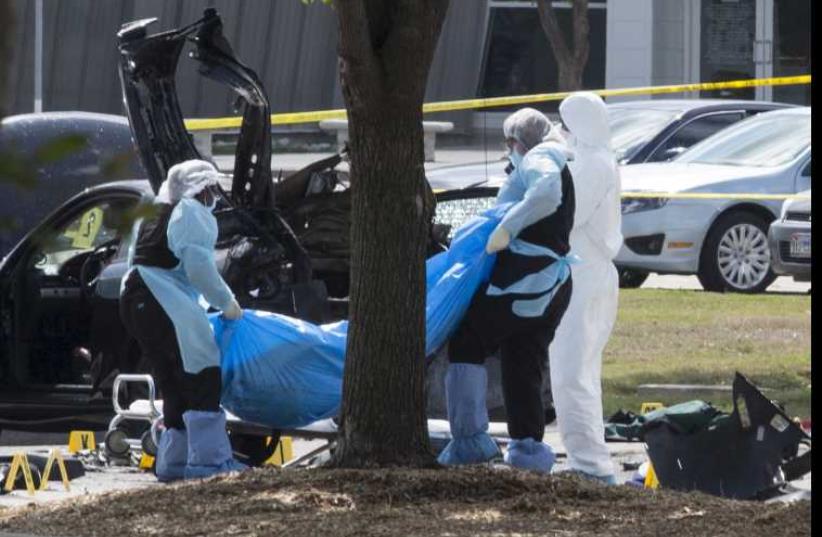 The bodies of two gunmen are removed from behind a car during an investigation by the FBI and local police in Garland, Texas May 4, 2015.
(photo credit: REUTERS)
Advertisement
WASHINGTON/AUSTIN - US investigators believe two men killed after opening fire on a Texas event that offered a prize for cartoons of the Prophet Mohammad represent an evolving model of "lone wolf" militants who are radicalized partly by themselves and partly through long-distance engagement with organized militants.Although the Islamic State movement claimed credit for the Texas shooting, several US officials said investigators have no evidence that either of the men shot dead by security personnel after they opened fire at the Garland, Texas, event traveled to Syria or Iraq. US court documents do show that one of the men, Elton Simpson, once tried to travel to Somalia.Officials also said that no hard evidence had emerged to demonstrate that Simpson and the second Texas shooter, Nadir Soofi, attacked the contest venue under direct orders, or encouragement, from Islamic State leaders.However, investigators are examining exchanges on Twitter in the days before the attack between Simpson and Junaid Hussain of the Cybercaliphate, an affiliate of IS, as well as between Simpson and Mujahid Miski of Minnesota, another alleged recruiter for violent jihad.But a US official said investigators believed it was likely that IS played an "inspirational" rather than an "operational" role in the attack.Soofi's father has said that someone coerced his son into participating in the attack, the Dallas Morning News reported on Wednesday.In a written statement posted online by the newspaper, Azam Soofi described Nadir as "a model son.""Someone pushed him into this situation," Azam Soofi said in the statement. He was not immediately available for comment.Nadir Soofi, who was born in the United States but lived abroad as a child, was a popular schoolboy in Pakistan but struggled to adjust after moving back to the US as a teen, friends who studied with him in Pakistan have said.A US intelligence official said that while the United States was concerned about Westerners traveling to Syria to fight with IS, "We also remain concerned about individuals in the West who are inspired by Isle's propaganda and may take violent action on their own ... We expect IS and its supporters to continue their efforts to incite fear and encourage lone wolf attacks around the world."According to a US intelligence estimate seen by Reuters, US agencies now believe that around 22,500 foreign fighters, including at least 4,000 Westerners, have traveled to Syria from more than 100 countries. That overall estimate, prepared in recent weeks, was 500 greater than a US estimate issued in February.However, US officials questioned the authenticity of a purported Islamic State communiques that surfaced on Wednesday that claimed the group had trained 71 soldiers in 15 different US states who were "ready at our word to attack any target we have desired." The communiques said that 23 of the 71 had signed up for "missions like" the Texas attack last weekend.