The newly-elected French president takes the reins and sees France as a human-rights superpower. 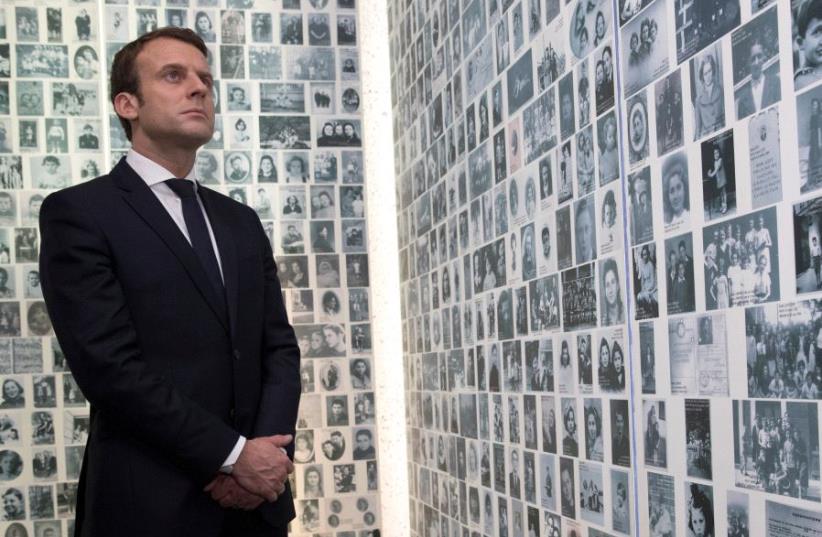 Emmanuel Macron, candidate for the 2017 presidential election, looks at some of the 2,500 photographs of young Jews deported from France during WWII, as he visits the Shoah Memorial in Paris, France, April 30, 2017
(photo credit: REUTERS)
Advertisement
PARIS – A succession of ceremonies marked the inauguration of Emmanuel Macron as France’s eighth president under the Fifth Republic. Outgoing president François Hollande received his successor at the Élysée Palace on Sunday morning and the two men spoke in private for more than an hour, after which Hollande left en route for the Socialist Party headquarters.
In victory speech, Macron pledges to serve France with "humility and love" (credit: REUTERS)
Guided by rigid French protocol, Macron’s day was still very much in his image. Similarly to his long walk on election evening, when he walked for several minutes, alone, across the Louvre Museum courtyard until he reached the stage, Macron walked alone on Sunday on the red carpet at the Élysée court toward his former boss and mentor Hollande.The speech Macron delivered an hour later was sober, with the new head of state saying he is “fully aware of the high expectations of the French citizens.“The French people has chosen hope and a spirit of achievement over a spirit of division and breaking away from the global market,” he said, adding that he now carries the responsibility of convincing French citizens that their country has all the resources necessary to once again be a leader within the family of nations.During his election campaign, Macron expressed himself several times on issues of foreign policy. On a visit to Beirut in January, he referred to the Israeli-Palestinian conflict, saying that “the role of France is to conduct an independent and balanced policy that would guarantee a dialogue by all sides and the construction of peace.”More specifically, Macron clearly stated during his campaign that he objects any efforts to boycott Israel, and considers such attempts antisemitic. Alluding to a court decision on the issue from 2015, he argued that “France has already condemned boycotting Israel, and I have no intention of changing this position.”Still, Macron is not expected to deviate a great deal from the policy set forth by his predecessor Hollande, of supporting the two-state solution. Philippe Etienne, the current ambassador to Berlin, will serve as Macron’s diplomatic adviser. Considered a remarkable diplomat, Etienne has not been especially involved during his career in Middle East issues, and thus is likely to embrace the path of Ambassador Pierre Vimont, who prepared the Paris 1 and 2 Middle East Conferences (the Israelis and Palestinians were not invited), on June 3, 2016, and January 15, 2017, respectively.Days before the visit of Trump to the region, it is too soon to tell whether Macron will push for a third Paris Conference or prefer to passively support an American initiative. Much will depend on his choice of foreign minister – expected to be announced on Tuesday.Macron had declared that he would start working “already tonight.” His first meeting with a foreign leader is already scheduled: Following French tradition and also his personal convictions, Macron will fly to Berlin on Monday to meet with German Chancellor Angela Merkel. He is also expected to announce on Monday his choice of prime minister. And so, his first steps as president are already traced: focusing on extracting France from the economic crisis it has been mired in for two decades, while strengthening the European Union and the Franco-German alliance.Macron has another huge task ahead of him – getting candidates from his new La République En Marche! party into the National Assembly in the June 11 and June 18 tworound legislative elections. In April 2016, well before announcing his presidential candidacy, Macron launched the En Marche! social-political movement. Following his May 7 presidential victory, he established his own party, vowing that it will present its own candidates for the 577 National Assembly seats. Without a majority in the legislature, the free-market reforms proposed by Macron would be difficult to pass.But Macron has ambitions not only to reform the French market and industry. He would also like to bring France much more forward on the international scene. According to his associates, the global political question mark of a Trump administration, an increasingly strong Russia and a UK Brexit, demand that Paris fill the role of a liberal, moderate, human-rights defending superpower. And in this setup, France intends to work hand in hand with Germany.