Macron, Le Pen turn up the heat in angry debate

Spectators and media experts shared the feeling that Wednesday’s debate was embarrassing. 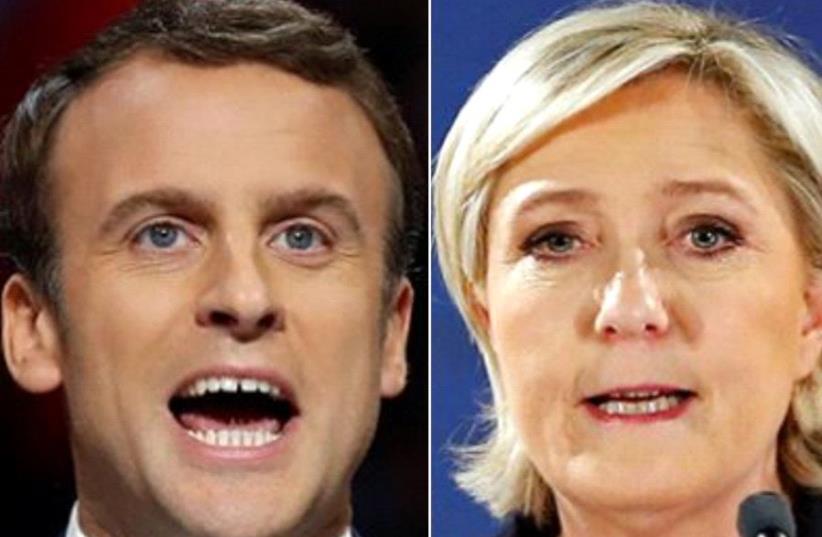 France votes: Macron vs Le Pen
(photo credit: REUTERS)
Advertisement
PARIS – Pundits are scratching their heads over whether the two outsider candidates in France’s national runoff election on Sunday really reflect the nation’s aspirations for a new kind of politics.The angry debate between Marine Le Pen and Emmanuel Macron on Wednesday night led many analysts to reminisce about past debates with such leaders as Valéry Giscard d’Estaing, François Mitterrand, Laurent Fabius and Jacques Chirac. In those contests, candidates made content as important as image, preserving what the French people cherish so much – the “presidential stature.”In other words, spectators and media experts shared the feeling that Wednesday’s debate was embarrassing.
Macron visits Paris holocaust memorial (credit: REUTERS)
Extreme-right candidate Le Pen showed her colors from minute one, when she attacked Macron, stating that he was “the candidate of wild globalization and economic insecurity at the service of the big finance groups.” It was a line she stuck with throughout the two-and-a-half-hour debate in an effort to drive Macron to lose his temper. And while Macron did respond sharply at times, for the most part he kept his composure and avoided that trap.Indeed, reaction to the debate showed Le Pen’s strategy was misguided. A poll published by BFMTV indicated 63% of viewers viewed Macron’s appearance as more convincing. While he was weak on combating extreme-Islamic terrorism and destabilized by Le Pen’s accusations of ties to a French Muslim NGO (Union of French Islamic Organizations), on all other issues he seemed to have the upper hand.This was especially true regarding Le Pen’s proposal to revive the French franc.Macron’s message on his rival’s proposal passed loud and clear: such a move would be costly and unjustified.But how much will the debate influence Sunday’s vote? Macron and Le Pen have only until Friday night to campaign, as no polls will be conducted or published as of then and no campaigning is allowed on Saturday. So Thursday’s televised confrontation was Le Pen’s last chance to reverse the trend that sees Macron winning with about 60% of the vote. Associates admitted this morning that it was a mistake for Le Pen to constantly, personally and brutally attack Macron at the expense of presenting the National Front’s own program.But even if Le Pen loses on Sunday, she will have succeeded in changing French society.Voting for the extreme Right is not considered shameful anymore and Le Pen herself is now considered a legitimate force within French politics. These are facts that Macron will have to deal with if he wins.Another major issue for Macron to tackle if elected will be his parliamentarian majority.Macron will need to establish a real party quickly – and prepare it in time for legislative elections in June. And since he has no party yet, his choice of prime minister will also be crucial. That person will need to attract as many incumbent members of Parliament (from the Socialist Party, the centrist group and right-wing Republican Party) in order to immediately guarantee a presidential majority.So far, Macron has refused to divulge whom he is considering for this important position and said this week, “First I need to win, then we’ll see about the prime minister.”