Four or five rockets land inside base in north of country; attack follows terror attack on hotel in capital that killed 20. 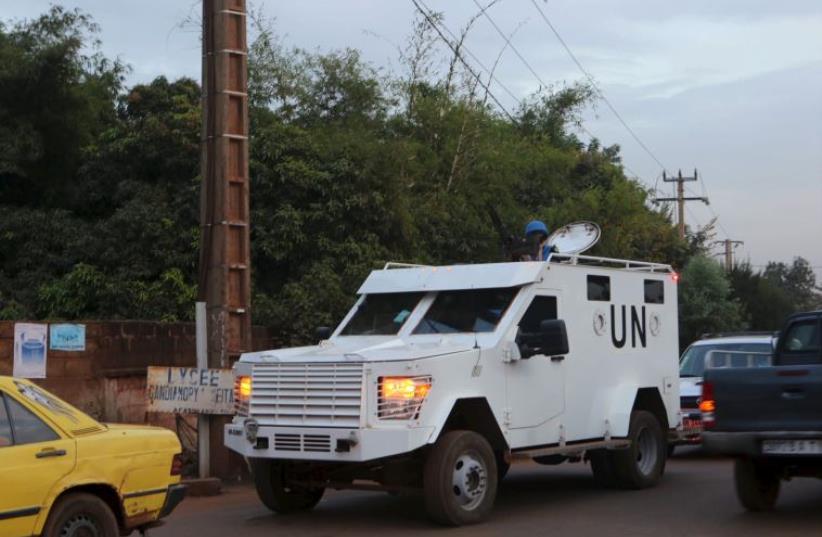 A UN armored vehicle patrols in Bamako, Mali, November 23, 2015.
(photo credit: REUTERS)
Advertisement
BAMAKO - The United Nations said unknown attackers fired rockets at a UN peacekeeping base in Kidal in northern Mali on Saturday, killing three people inside, in the latest sign that the West African country's Islamist insurgency is intensifying.French troops and the 10,000-strong UN force are struggling to stabilize the former French colony where Islamist militants attacked a hotel in the capital on Nov. 20 and killed 20 people, in their bloodiest attack yet in the country's south.Desert-based jihadists regularly launch rockets and missiles at northern UN bases, especially around full moon when the lighter nights make it easier to target the camps, although it is rare for the missiles to land inside the camp."They fired rockets from around 4am inside the MINUSMA camp," Olivier Salgado, Deputy Chief of Communication in the peacekeeping mission, told Reuters."We have three dead and four seriously injured," he said, adding that there were a total of 20 wounded and that medical evacuations were underway.He did not name the victims' nationalities although a UN source said two were peacekeepers from neighboring Guinea.A witness said that bursts of gunfire were heard shortly after the rockets landed as well as mortar fire coming from inside the camp.JIHADIST WARNINGA security source in north Mali who wished to remain anonymous said the Kidal camp had received a warning two days before the attack from an unnamed jihadist group. A local deputy for Kidal Ahmoudene Ag Ikmasse also blamed radical Islamists.Northern Mali was taken over by Islamist fighters, some with links to al-Qaida, for most of 2012. They were driven out by a French-led military operation a year later, but violence has continued and spread into formerly safe areas in the south.Three Islamist militant groups - al-Qaida in the Islamic Maghreb (AQMI), its splinter group al Mourabitoun and Massina Liberation Front (MLF) - claimed last week's attack on the Radisson Blu hotel that killed Russian and Chinese nationals as well as an American, among others.Security analysts say the groups could be collaborating.Some analysts say the spike in jihadist attacks is designed to disrupt the implementation of a peace deal signed between various northern armed groups and Mali's government in June."I want to reiterate that these attacks will not impede the determination of the United Nations to support the Malian people and the peace process," said UN Special Envoy for the Mali mission, Mongi Hamdi on Saturday.A French soldier, part of the 3,500 Barkhane anti-terrorism force operating across the Sahel, and a UN peacekeeper were killed by landmines this week.Germany has said it is willing to send up to 650 soldiers to bolster the UN force which has yet to reach its full strength of 12,680 men.Other West African states are also battling Islamist militants. Boko Haram, the leading such group in the region, has this year extended its attacks from Nigeria to neighboring states of Niger, Cameroon and Chad.