Local authorities are searching for the perpetrator of the incident. 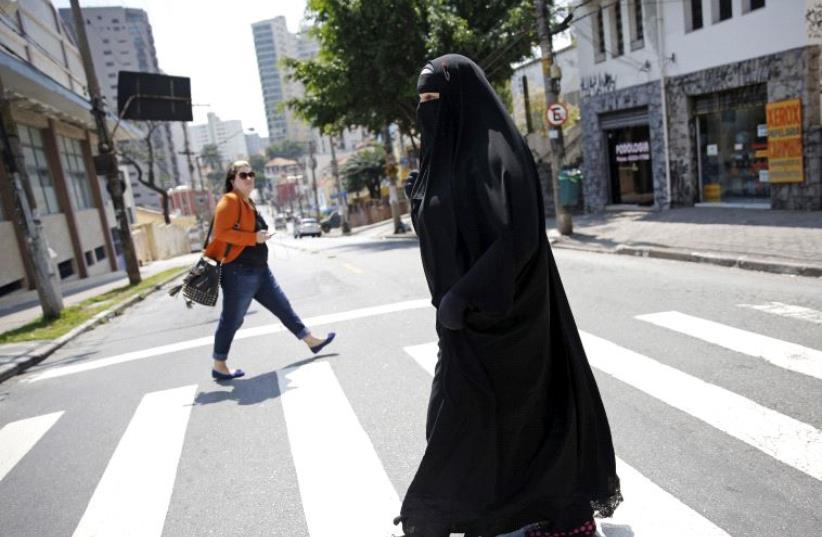 Muslim woman (illustrative)
(photo credit: REUTERS)
Advertisement
NEW YORK - New York City investigators on Tuesday searched for a man suspected of setting fire to a traditionally dressed Muslim woman in a Midtown shopping area, police said.Police said they were investigating the incident, which occurred the day before the 15th anniversary of the Sept. 11, 2001 attacks, as a hate crime.The 35-year-old woman was standing outside a luxury clothing boutique on Park Avenue on Saturday evening when she felt her left arm suddenly heat up and noticed her blouse was on fire, city police said in a statement."She patted out the fire and observed a male standing next to her with a lighter in his hand," police said.The victim, who local media reported was a tourist from Scotland, was not injured and declined medical attention, police said. Authorities did not name her.The suspect fled before officers arrived.
New York Police release still from surveillance video (Reuters)
On Tuesday, police released video surveillance footage of the suspect, a slim young-looking man wearing a backwards baseball cap walking down a sidewalk. No arrests have been made.The Council on Islamic American Relations has condemned the incident, which it said followed an increasing number of attacks targeting Muslims in the United States."We are clearly seeing a spike in attacks on individual Muslims and Islamic institutions in New York and around the country," the Muslim advocacy group said in a statement on Monday. "It is time for the mayor and the NYPD to put forward the necessary resources to investigate and prevent these attacks on the Muslim community."Last month, a man killed a Muslim cleric and his associate on the street as they left a mosque in borough of Queens.