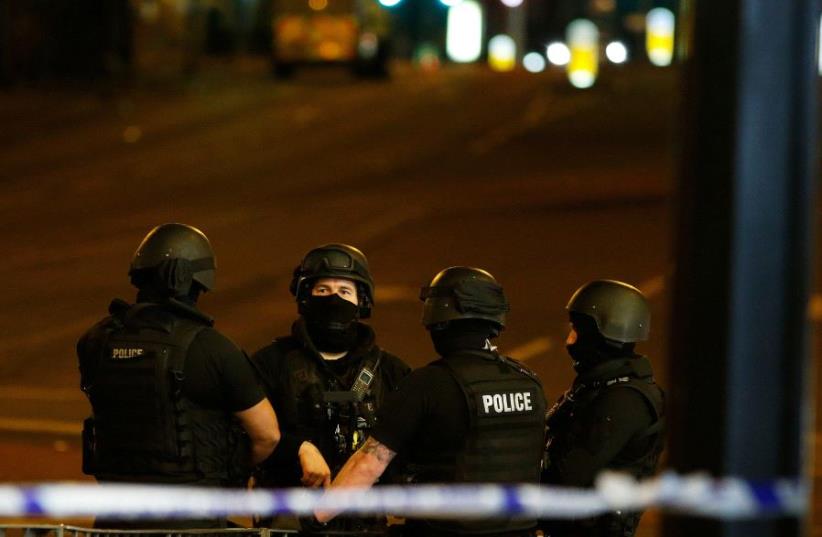 Armed police officers stand near the Manchester Arena, where US singer Ariana Grande had been performing, in Manchester, northern England, Britain May 23, 2017.
(photo credit: REUTERS)
Advertisement
The Manchester attack “marks clearly a new phase in the attempt” by terrorists “to intimidate us, but it won’t succeed, British Standpoint magazine chief editor Daniel Johnson told The Jerusalem Post on Tuesday.Johnson made the comments in the middle of a conference at IDC Herzliya about balancing liberal values with various challenges, such as terrorism.He started by noting, “I do feel very personally involved regarding the attack at Manchester as I have a daughter, Agatha, in university there,” adding that luckily she was not present at the specific site of the bombing.Johnson said, though, that “for Briton, it isn’t unprecedented, we haven’t had this kind of attack, a successful one” involving a large bomb “for quite a long time,” since the 2005 London subway attack.“Suicide bombers targeting rock concerts, if successful, are going to produce very high casualties and they are difficult to stop when cleverly planned and executed,” he said.Johnson said his “impression is that security has been hugely increased in all these kinds of venues” and that he would be surprised if this was a straightforward lapse. “Rather, they [terrorists] have found clever ways of getting past security. It does seem the bomb went off near the entrance to the hall, so he [the bomber] didn’t get quite inside.”Johnson agreed that in one sense, the presence of security in this case might have prevented even worse casualties which could have occurred had the bomber gotten all the way inside the hall.Discussing balancing security and democracy and where the attack could change things, he said, “There is a great tradition in my country where the police are seen as friends, not seen as the ‘other.’ One reason is they don’t routinely carry weapons. That may have to change now that we are facing an incredibly ruthless terrorist threat.”But Johnson added that the “bigger problem is not about security, but community relations.”He said Manchester is a growing powerhouse city, but “the Muslim population has hugely increased in the last 20 years, and clearly a very tiny percentage of those people have been radicalized.”“We are also facing those who fought for ISIS returning, some hundreds have returned. I am sure they are being tracked as much as can be by intelligence services. But it is like looking for a needle in a haystack. That political debate will be reignited,” he continued.Johnson said that England will need to revisit its policies regarding prisons, where he said many prisoners get more radicalized. He added that the government must also follow messages of incitements coming out of mosques and schools, though that must be done very sensitively.“We need to ask about social media. Big platforms like Google and Facebook have allowed extremist propaganda to be accompanied by ads for mainstream brands,” he said.“The big question mark for the tech companies is, will they tackle this problem, because so far they haven’t and have denied they are the publishers of these videos – but clearly they are playing a role.”Moreover, Johnson argued, “They owe the rest of society... they must use every technical means possible to eliminate the infiltration of social media” by terrorists. But, he cautioned, “There are real dangers in excessive restrictions and censorship.”Johnson also suggested the attack would give a boost to British Prime Minister Theresa May in the upcoming election due to her wealth of experience with internal security issues.Regarding his visit to Israel and the IDC Herzliya conference, Johnson said his main message was that “Israel and the West... are engaged in the same civilizational battle. I will urge friends at the conference: The West must show in concrete terms that it will defend not just Israel’s right to exist, but its right to flourish with every means we have.”Johnson said this could be done with formal security guarantees by the West and by Western countries moving their embassies to Jerusalem.