PM and president are not attending the ceremony, but the master of ceremonies was apparently not informed.

By JPOST.COM STAFF
DECEMBER 10, 2013 14:54
Netanyahu peres combo 370
(photo credit: GPO)
Advertisement
The master of ceremonies at the memorial service for former South African President Nelson Mandela accidentally announced the presence of Prime Minister Binyamin Netanyahu and President Shimon Peres, although they did not attend the event.Netanyahu had announced on Monday, that he would not be leading a delegation to the funeral due to "security and cost concerns."Peres, a second option, then also announced that he would not be attending due to recommendations from his doctor, since he had been under the weather with a bad case of the flu. 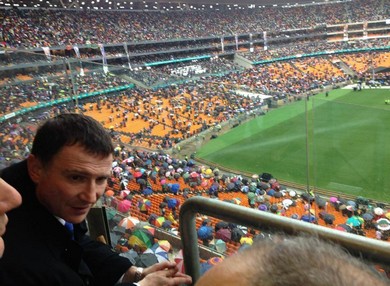