Failure to form a government in Europe's largest economy could have implications for everything from euro zone reforms to relations with post-Brexit Britain.

By REUTERS
NOVEMBER 20, 2017 10:04
German Chancellor and leader of the Christian Democratic Union CDU Angela Merkel votes in the general election (Bundestagswahl) in Berlin, Germany, September 24, 2017.
(photo credit: REUTERS/KAI PFAFFENBACH)
Advertisement
BERLIN - Chancellor Angela Merkel said on Monday her efforts to form a three-way coalition government had failed, thrusting Germany into a political crisis and pushing Europe's largest economy closer to a possible new election.The pro-business Free Democrats (FDP) unexpectedly pulled out after more than four weeks of negotiations with Merkel's conservative bloc and the ecologist Greens, citing irreconcilable differences.The euro hit a two-month low against the yen soon after FDP leader Christian Lindner said on Sunday that his party was withdrawing as the three would-be partners could not find common ground on key issues.
Merkel braces for coalition tussle after vote. (Reuters)
A tired-looking Merkel said she would stay on as acting chancellor and would consult with President Frank-Walter Steinmeier on how to move forward, adding that a deal had been within reach."It is a day of deep reflection on how to go forward in Germany," Merkel told reporters. "As chancellor, I will do everything to ensure that this country is well managed in the difficult weeks to come."It was a sobering moment in the career of a woman who during 12 years in power has become a symbol of stability, leading the euro zone during its debt crisis and forging a deal between the European Union and Turkey to stem migrant arrivals.Merkel was weakened after a September election as voters angry with her decision in 2015 to open Germany's borders to more than a million asylum seekers punished her conservatives by voting for the far-right Alternative for Germany (AfD) party.The collapse of the talks suggests Germany is heading towards two options unprecedented in the post-World War Two era: Merkel forms a minority government, or the president calls a new election if no government is formed.The center-left Social Democrats (SPD), Merkel's current coalition partners who were the second-biggest party in the election, have ruled out a repeat of an alliance with her conservatives, who won the vote but were left with fewer seats.However, Merkel ally Jens Spahn said he was not yet thinking about new elections and held out the possibility of teaming up with the SPD, with whom the conservatives still rule in a caretaking capacity."We have a capable acting government, the necessary things can get done," he said. "There is no grounds for panic.""Some SPD ministers have made clear they want to govern," Spahn told n-tv television. "The SPD will have to... decide whether it is ready to take responsibility, for the biggest country in the middle of Europe."There is little appetite for a new election. The main parties fear that the AfD would add to the 13 percent of votes it secured in September, which saw it surge into parliament as the third-biggest party.'DIFFICULT FOR ECONOMY' 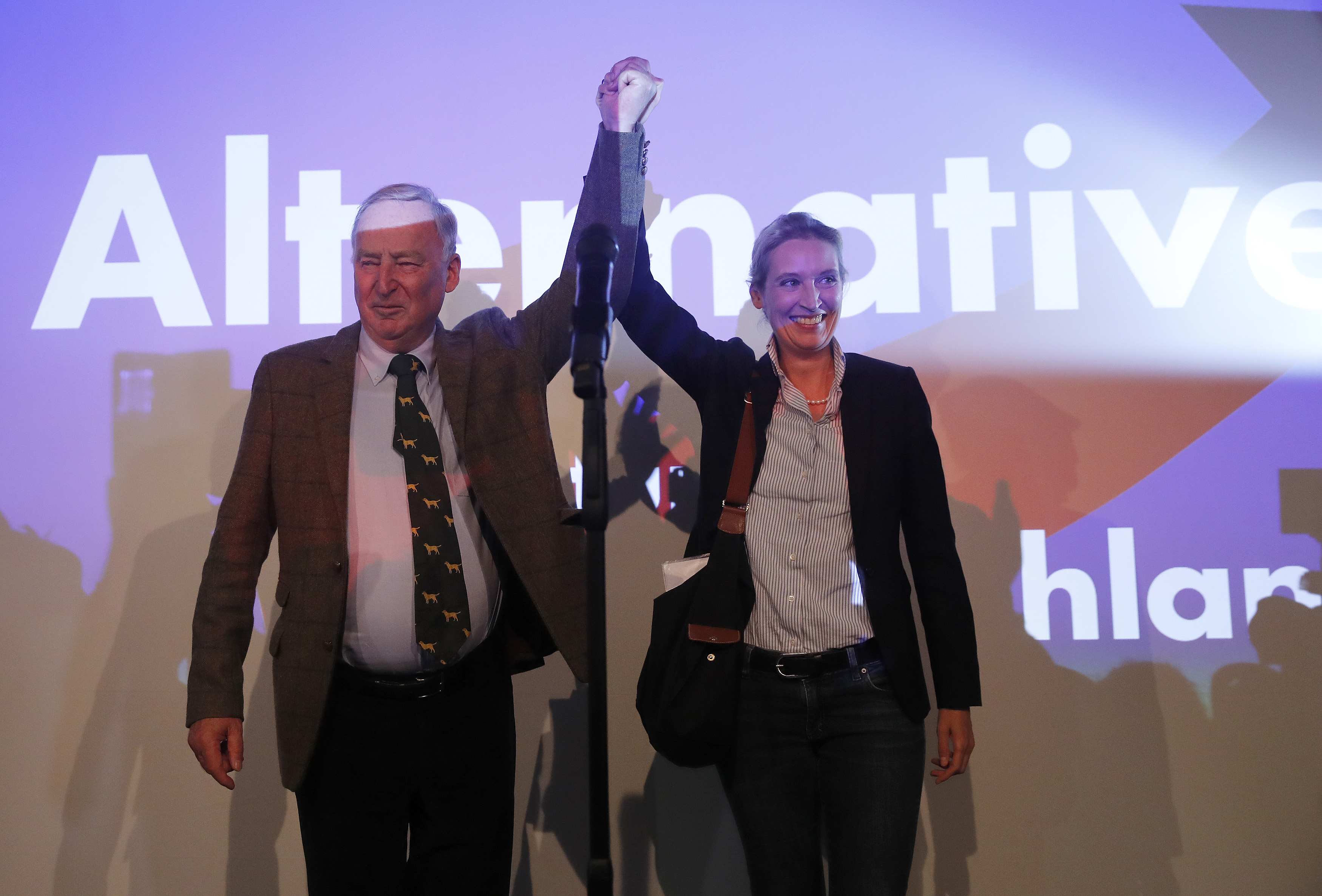 Alice Weidel and Alexander Gauland, top candidates of the anti-immigration party Alternative fuer Deutschland (AfD) (credit: WOLFGANG RATTAY / REUTERS)Failure to form a government in Europe's largest economy could have implications for everything from euro zone reforms championed by French President Emmanuel Macron to the shape of relations with Britain after it leaves the EU.The next government was also expected to increase spending, raising hopes of more fiscal stimulus for an economy that has been relying on consumption and state spending for growth.The DIHK Chambers of Industry and Commerce said a prolonged period of uncertainty would be bad for the economy."There is the danger that work on major issues for the future of our country will be delayed for a prolonged period of time," DIHK President Eric Schweitzer wrote in an email. "German companies must now prepare for a possibly long period of uncertainty. This is always difficult for the economy."The break down of the talks came as a surprise, especially as it was announced by the resurgent FDP, Merkel's preferred coalition partners who had dropped out of parliament four years ago and had ruled with her conservatives during 2009-2013.After its impressive electoral comeback, the FDP's decision to pull out of coalition talks was puzzling, according to Jackson Janes, of the American Institute for Contemporary German Studies at Johns Hopkins University."And it is also a dangerous game of poker for Germany," Janes added.Immigration was the main sticking point in the negotiations. Merkel's Christian Democrats (CDU) and their Christian Social Union (CSU) Bavarian allies had demanded a yearly cap on the number of asylum seekers that Germany accepts each year, a measure rejected by the Greens.There was also discord over conservative proposals to limit the right of some accepted asylum seekers to bring in immediate family members. Merkel said a compromise with the Greens on immigration had also been possible.Government spending, tax cuts and climate policy had also been sticking points."Today there was no progress but rather there were setbacks because specific compromises were questioned," the FDP's Lindner said. "It is better not to rule than to rule the wrong way. Goodbye!"