Militants may have spent as little as $7,500 on Paris attacks

World leaders scrambled to crack down on terrorist financing after the Nov. 13 assaults, which have been claimed by Islamic State in retaliation for strikes on Iraq and Syria. 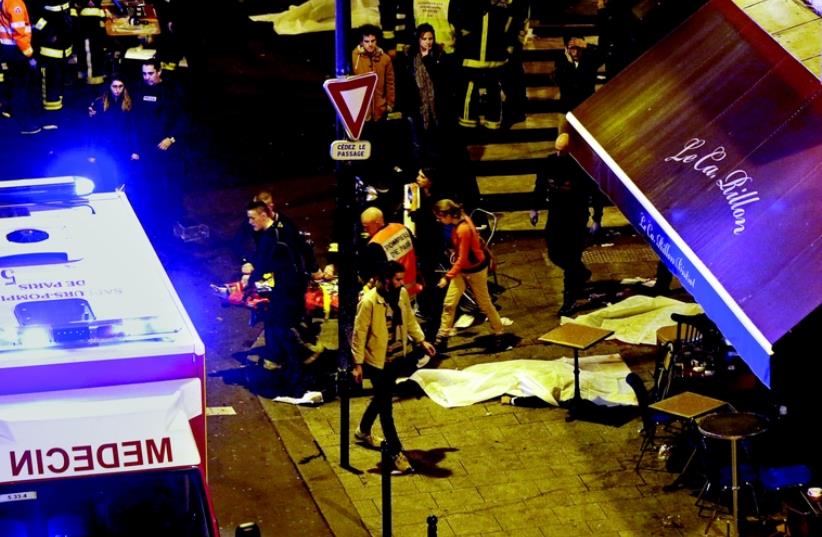 Attentats meurtriers en plein Paris
(photo credit: REUTERS)
Advertisement
LONDON - The militants who killed 130 people in Paris, triggering waves of air strikes on Syria and security alerts around the world, may have spent as little as around 7,000 euros ($7,500) to stage their attacks.World leaders scrambled to crack down on terrorist financing after the Nov. 13 assaults, which have been claimed by Islamic State in retaliation for strikes on Iraq and Syria.Within days, France and Belgium announced 1 billion euros worth of additional security measures.In contrast, the attacks themselves, requiring little more than Kalashnikovs and ammunition, homemade suicide belts, rental cars and apartments, suggest that the eight attackers spent relatively little to kill indiscriminately and sow fear and confusion.The Sept. 11 attacks on Washington and New York cost between $400,000 and $500,000, according to the independent 9/11 Commission, a sum that covered pilot training for the hijackers, flights and living expenses over an extended period of training and preparation.A Reuters calculation has estimated the Paris attacks - which killed mainly young people enjoying a Friday evening out at bars, restaurants, the Stade de France sports stadium and the Bataclan concert venue - could have cost less than around 2 percent of that.Reuters was unable to reliably calculate certain costs including the sum for any accomplices who may have come from outside France and Belgium. These costs were not included in the total.The most sophisticated part of the attack, making the suicide vests, would have only required some cheap materials. Security sources said this job would have fallen to an experienced bomb-maker who was likely not to have been one of the actual attackers.All seven dead assailants in Paris were wearing and used suicide belts, with identical TATP detonation compound, a battery and a blow-up button, French police said.TATP - or "Mother of Satan" as it is known in security circles - can be made from basic household products and was used in the attacks on London in July 2005 and by "shoe-bomber" Richard Reid who tried to blow up an airliner in December 2001, for example.The chemical ingredients are available at pharmacies for as little as 5-10 euros for each belt, and the bolts used in the belts of the three Stade de France attackers would have cost about 150 euros for 500 bolts each in a DIY store.There were at least eight attackers and their two Paris apartments - one rented for one week and the other for three nights - could have come to around 680 euros, according to publicly available prices seen by Reuters which were matched against police information on the equipment used.The Volkswagen Polo, Seat Leon and Renault Clio cars that investigators say were rented to bring the militants from Brussels to Paris would have cost around 595 euros from a major car rental agency, assuming they were rented for one week, including petrol and tolls.A Kalashnikov can be acquired in the European Union for between 300 and 700 euros, the European Police Office Europol says. The price for 7.62 caliber bullets - the caliber of most of the several hundred bullet shells found outside the restaurants last Friday night - is around 500 euros for 2,000 on the Internet.With three Kalashnikovs used in the Bataclan attack and three found in one of the cars, plus probably one other, that cost would come to 5,400 euros.Other costs of the operation remain murky. For example, one of the suicide bombers at the Stade de France may have traveled on a Syrian passport under the name Ahmad Al Mohammad along a well-worn path of refugees fleeing to Europe through Greek islands.Estimates of the cost of such a trip from the Syria-Turkey border through Greece - also not included in the Reuters calculations - vary widely.Pulling together information from bus companies, a ferry company, a travel agent, police and a source at a voluntary relief organization operating on the island of Leros, the cost of traveling from Turkey to the Macedonian border could start at 1,200 euros. That would be the cheapest option, using the kind of dinghies that have resulted in scores of refugee deaths and would not include the cost of forged documents.For a sea crossing on a safer boat, with forged documents provided, the cost would rise to around 5,000 euros.