The officials said Hamzeh had been under investigation since September and had first considered an attack on Israelis in the West Bank but decided instead to plan an attack in the United States. 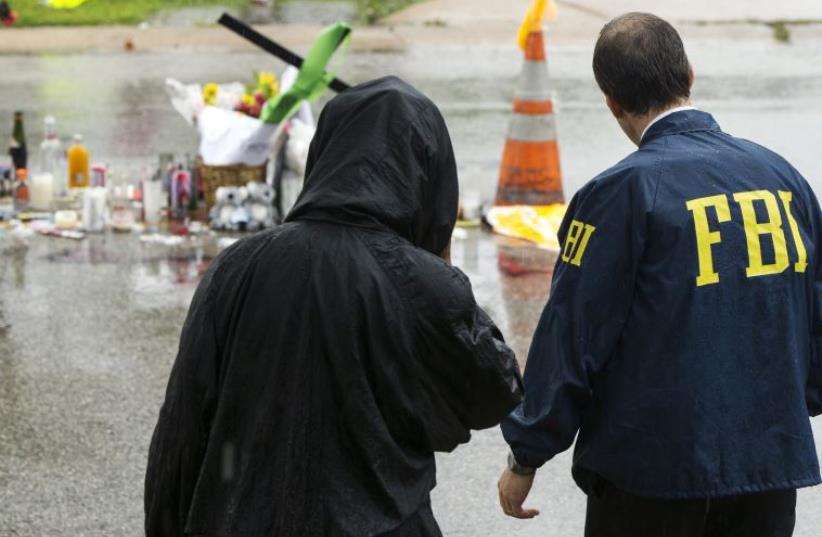 An FBI agent interviews a resident of Ferguson, Missouri.
(photo credit: LUCAS JACKSON / REUTERS)
Advertisement
MILWAUKEE- A Milwaukee man who authorities said was planning to kill dozens of people in a mass shooting at a Masonic temple has been arrested and charged with possession of two machine guns and a silencer, federal officials said on Tuesday.Samy Mohamed Hamzeh, 23, told two people who turned out to be FBI confidential sources that he planned to carry out the shooting at a Masonic temple in Milwaukee in an attack that would be "known the world over" and in order to "ignite broader clashes," the US Department of Justice said in a statement.The officials said Hamzeh had been under investigation since September and had first considered an attack on Israelis in the West Bank but decided instead to plan an attack in the United States. He abandoned that plan because of family, financial and logistical reasons, according to a criminal complaint.Authorities did not indicate whether Hamzeh is a US citizen. He was arrested on Monday after he bought the two machine guns and a silencer from undercover FBI agents during a meeting that included the FBI sources, authorities said.Hamzeh enlisted the help of two people he did not know were confidential sources for the FBI, and the trio had conversations in Arabic about plans to attack the temple, prosecutors said."We are Muslims, defending Muslim religion, we are on our own ...," he said, according to the complaint.On Jan. 19, the three practiced firing a handgun at a range and then took a guided tour of the Masonic temple to learn when and where people would be meeting, the criminal complaint said.Hamzeh told the others they each needed to have a machine gun and a silencer, the Justice Department said.During their discussions about the attack, Hamzeh said he envisioned one person guarding the temple's main door while the others went upstairs to kill people in a meeting, according to authorities."I am telling you, if this hit is executed, it will be known all over the world," Hamzeh told the sources, according to the Justice Department. "Sure, all over the world, all the mujahedeen will be talking and they will be proud of us."A Masonic temple is a meeting place for Masons, members of a fraternal organization.