Momentum for referendum growing on eve of Kurdistan independence vote

Israel is the only country that has openly supported the referendum.

By SETH J. FRANTZMAN
SEPTEMBER 24, 2017 11:06
KURDISH PEOPLE attend a rally to show their support for the upcoming September 25th independence referendum in Duhuk, Iraq.
(photo credit: REUTERS)
Advertisement
Erbil - The hospitals are draped in Kurdish flags. So are the hotels. Even the Sun Oil gas stations. Everywhere in Erbil, the capital of the Kurdistan Regional Government, the city is awaiting the September 25 referendum on independence."Yes for Kurdistan,” say some of the posters in English. Others show the face of Kurdish leader Masoud Barzani, who embodies the struggle for this dream among many Kurds in this area of northern Iraq.Tens of thousands packed a rally in Erbil’s stadium on Friday, waving a sea of Kurdish flags. Among them were also Israeli flags, a display of affection for the one country that has openly supported the referendum. 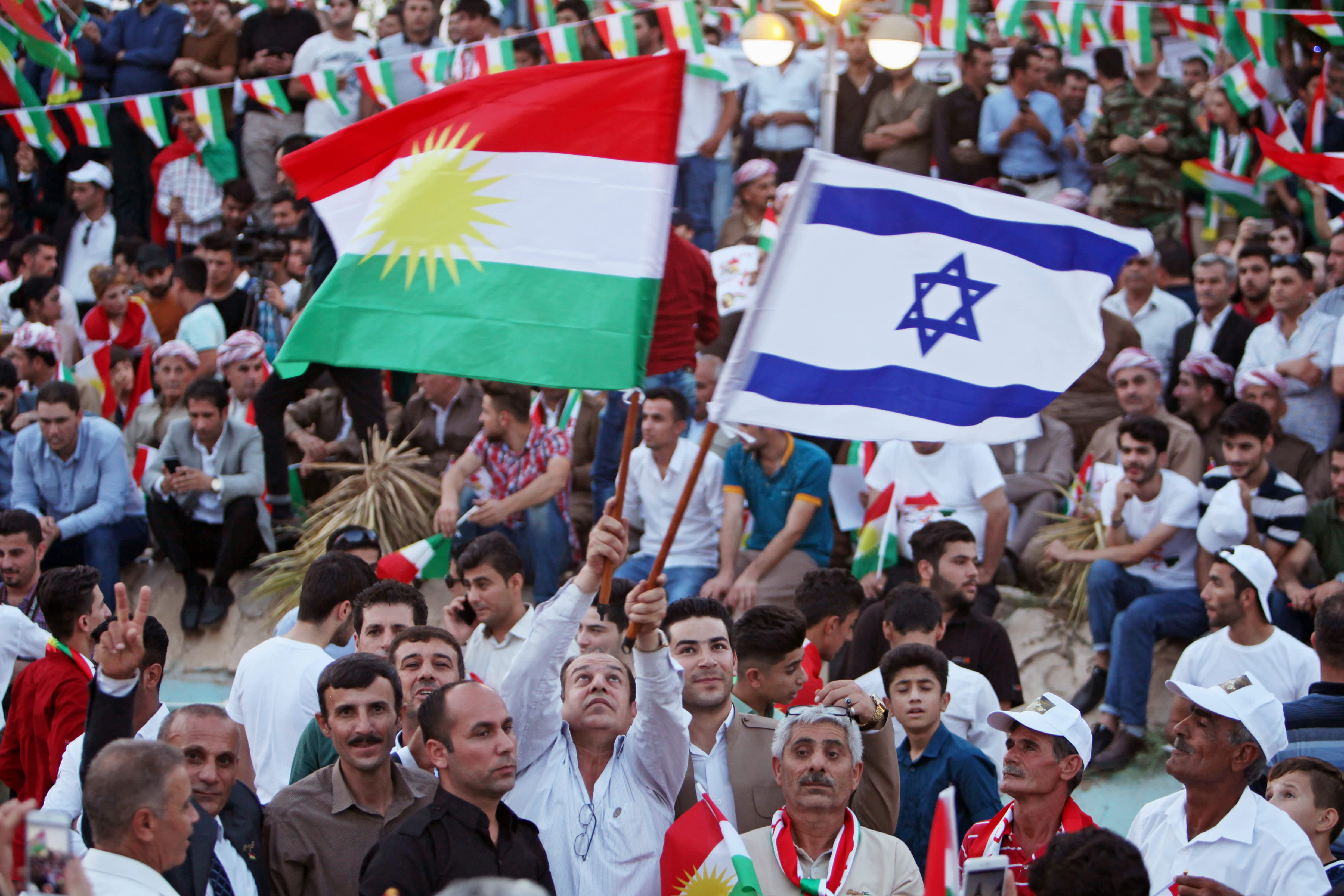 A Kurdish man holds an Israeli and Kurdish flag during a rally to show their support for the upcoming September 25th independence referendum in Erbil, Iraq September 16, 2017. (REUTERS/AZAD LASHKARIG)Some Kurds say this moment is their 1948 – a reference to Israel’s declaration of independence. They see the challenges Israel faced in its early years as similar to the problems their region now faces.Iran, Turkey, the Iraqi government in Baghdad, the US, UK, the UN and many other countries have pressured the Kurdish leadership to cancel or postpone the vote. Even up to the eleventh hour the pressure continues, with the UN Security Council expressing concern about the vote and US presidential envoy for the coalition to counter the Islamic State Brett McGurk encouraging Barzani to reconsider.“There is no Iraq, it is a militia state,” says Hussein Yazdanpanah, a leader of the Kurdistan Freedom Party (PAK), who serves a front line commander northwest of Kirkuk.Yazdanpanah’s Peshmerga soldiers are Iranian Kurds who oppose the regime at home and have come to the Kurdish region of Iraq to fight alongside their comrades against the common threat of the Islamic State. His men have been holding a front line for three years on a line of dusty hills that overlooks Hawija, where the Iraqi army launched an offensive on September 20.“Iran, Iraq and Turkey do propaganda against the referendum,” he says, sitting in a chair that overlooks the flat plains around Kirkuk. “Kurdistan has enemies, but also friends. The most important thing you see here is that we have all the minorities and ethnicities [and they] want a referendum. Kurds decided not to stay with this country [Iraq] which has discrimination and inequality.”

A poster in Erbil supporting Kurdish referendum. (Seth J. Frantzman)He argues that Baghdad is dominated by pro-Iranian sectarian groups and the Iranian Revolutionary Guards Corps Quds Force. He even shows photos of men in tan uniforms he says are Quds Force members spotted south of his position at Tuz Khurmato, a town disputed between Kurds and Shi’a Turkmen.“We in the PAK are ready for the Hashd al-Shaabi [Shi’a militias] and Iran and Iraq and everyone.”As the region moves toward what seems like an inevitable referendum, the momentum is growing.Kurdish politics have been divided over the years between the powerful Kurdistan Democratic Party (KDP) and the Patriotic Union of Kurdistan (PUK), but a symbolic rally by the KDP’s Barzani in Sulaimaniya, where the PUK is the leading party, indicated a sense of unity.Three years of war against ISIS in which all the Kurdish forces fought a common enemy, together with memories of Saddam Hussein’s genocide in the 1980s, help cement this unity.The referendum is not without controversy within Kurdistan.Rumors that the vote will be postponed swirl in some conversations. On Saturday, the election’s commission confirmed the referendum will take place on time.Not everyone is convinced. One man said he would wait until the night before to believe it.