By REUTERS
DECEMBER 19, 2011 09:37
North Korean leader Kim Jong-il 311 r
(photo credit: REUTERS)
Advertisement
SEOUL - North Korean leader Kim Jong-il died of a heart attack while on a train trip, state media reported on Monday, sparking immediate concern over who is in control of the reclusive state and its nuclear program.A tearful television announcer dressed in black said the 69-year old had died on Saturday of physical and mental over-work on his way to give "field guidance" - a reference to advice dispensed by the "Dear Leader" on his trips to factories, farms and military bases.RELATED:
Analysis: Kim death complicates N.Korea nuclear quandary
Europe shares drop on Kim Jong-il deathKim Jong-un, Kim Jong-il's youngest son, was named by North Korea's official news agency KCNA as the "great successor" to his father, which lauded him as "the outstanding leader of our party, army and people."Video from Chinese state television showed residents of Pyongyang, the North Korean capital, weeping while KCNA reported people were "writhing in pain" from the loss. 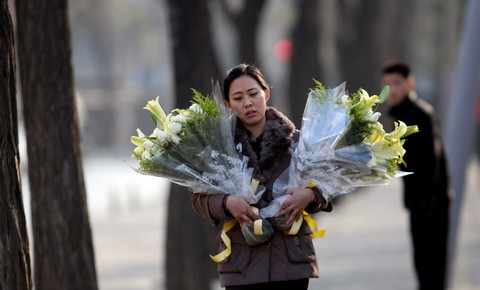 "We will have victory in our revolution today and tomorrow because we have comrade Kim Jong-un," KCNA quoted 55-year-old Ho Song-chol as saying.Though people were crying on the streets of Pyongyang, life appeared to be going on largely as normal with light traffic and an occasional tram or trolley bus passing by in weak winter sunshine. 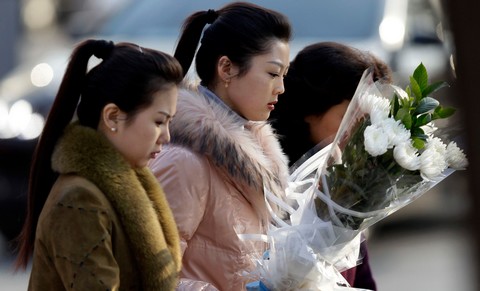 Little is known of Jong-un who is believed to be in his late 20s and was appointed to senior political and military posts in 2010.KCNA said the elder Kim died at 8:30 a.m. on Saturday (2330 GMT on Friday) after "an advanced acute myocardial infarction, complicated with a serious heart shock." Kim had suffered a stroke in 2008, but had appeared to have recovered.South Korea, still technically at war with the North, placed its troops and all government workers on emergency alert but Seoul's Defense Ministry said there were no signs of any unusual North Korean troop movements and President Lee Myung-bak called for people to carry on with their normal lives.North Korea test-fired a short-range missile on its eastern coast on Monday, however an unnamed South Korean official was quoted by Yonhap news agency as saying he did not believe the launch was linked to the announcement of Kim's death."This is something that the military has continued to follow, and we believe it is not related to the death of Chairman Kim Jong-il," Yonhap quoted the official as saying.The launch probably came in the morning, before the North's state media announced at noon the death of Kim from a heart attack on Saturday.The North periodically test-fires short-range missiles into the waters off its coasts as part of routine training or timed to sensitive political developments. Reports of the last such firing came in June. 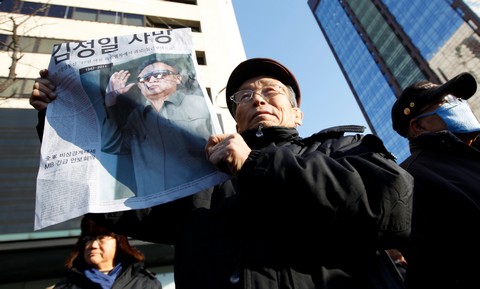 Lee held talks with President Barack Obama over the telephone as the United States is the main guarantor of South Korea's security. Seoul was also due to hold talks with government officials in Tokyo later in the day."Up until tonight, if anybody had asked you what would be the most likely scenario under which the North Korean regime could collapse, the answer would be the sudden death of Kim Jong-il," said Victor Cha, a Korea expert with the Center for Strategic and International Studies think-tank in Washington."And so I think right now we're in that scenario and we don't know how it's going to turn out."The White House said President Barack Obama had been notified of the reports of Kim's death and it was closely monitoring and in touch with South Korea and Japan.The United States was committed to stability on the Korean peninsula as well as to its allies, the White House press secretary said.Japanese Prime Minister Yoshihiko Noda told ministers at a special security meeting to prepare for the unexpected, including on border affairs, Japan's top government spokesman said. 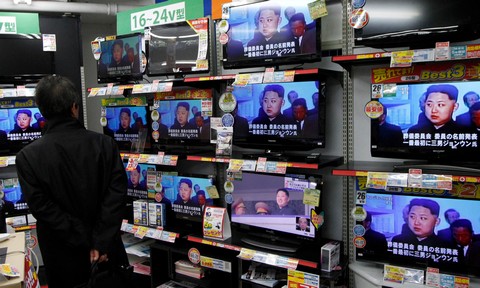 China, North Korea's only major ally, expressed grief and offered condolences.Market players and regional powers will be on edge over what might happen next in the isolated state, whose collapsing economy and bid to become a nuclear weapons power pose major threats to northeast Asia.Asian stocks and US index futures fell, with South Korean shares tumbling as much as 5 percent, and the dollar gained after the announcement. The Korean won fell 1.8 percent.Kim Jong-un was at the head of a long list of officials making up the funeral committee, indicating he would lead it, and a key sign that he had taken, or been given, charge.But there will be enormous questions over how much credibility the younger Kim has, since he is only in his late 20s and has had little time to prepare for the role."Kim Jong-un is not yet the official heir, but the regime will move in the direction of Kim Jong-un taking center stage," said Chung Young-Tae at the Korea Institute of National Unification. "There is a big possibility that a power struggle may happen."It's likely the military will support Kim Jong-un," he added. "Right now there will be control wielded over the people to keep them from descending into chaos in this tumultuous time."Heir reported to have 'ruthless streak'Kim Jong-il's sister and her husband have also been promoted to important political and military posts, creating a powerful triumvirate ready to take over the family dynasty that has ruled North Korea since its founding after World War Two.Experts say Jong-un has the intelligence and leadership skills that would make him suitable to succeed his father. He is also reported to have a ruthless streak that analysts say he would need to rule the country.There is likely to be an outpouring of emotion over Kim's death in North Korea, where the country's propaganda machine turned him into a demi-god. His funeral will be held on December 28.On the streets of the South Korean capital, Seoul, however the death of a man whose country had threatened to turn the city into a "sea of fire" ranged from indifference to over-joyed."The whole earth should celebrate it as much as Christmas," said Kim Ok-tae, a 58-year old pastor."I am not at all afraid. I don't see any likelihood of North Korea lashing out unexpectedly."Kim was the unchallenged head of a communist state whose economy fell deep into poverty during his 17 years in power as he vexed the world by developing a nuclear arms program and missiles aimed at neighbors Japan and South Korea.North Korea, which tested a nuclear device in 2006 and again in May 2009, is seen as one of the greatest threats to regional security.In 2010, the secretive North unveiled a uranium enrichment facility, giving it a second route to make an atomic bomb along with its plutonium program.Cha said communication between China, the United States and South Korea was vital."Because these are the three key players when it comes to instability in North Korea. And the Chinese have been reluctant to have any conversations on this," he said."Now the situation really calls for it. It will be interesting to see how much the Chinese will be willing to have some sort of discussion."The North has repeatedly threatened to destroy the conservative government of South Korean President Lee Myung-bak, who ended a decade of free-flowing aid to the North after taking office in February 2008.It also has a reputation for provocative external action in response to internal pressures."Often in times like this, the regime will do something to demonstrate that it is still viable, powerful, still a threat," said Dane Chamorro, a regional director at risk consultancy Control Risks."It might be a missile test, some type of aggression or conflict."Known at home as "the Dear Leader," Kim took over the reins of North Korea in 1994 when his father and founder of the reclusive state, Kim Il-sung, known as the Great Leader, died.Tension between the two Koreas spiked to its highest level in nearly two decades in 2010 when 50 South Koreans were killed in two separate attacks on the peninsula, but relations have improved this year due to pressure from Beijing and Washington.
Advertisement
Subscribe for our daily newsletter