The affair which is Europe’s only annual event by Waffen SS vets, drew a handful of counter-protesters from Latvia’s Jewish community and anti-fascist activists. 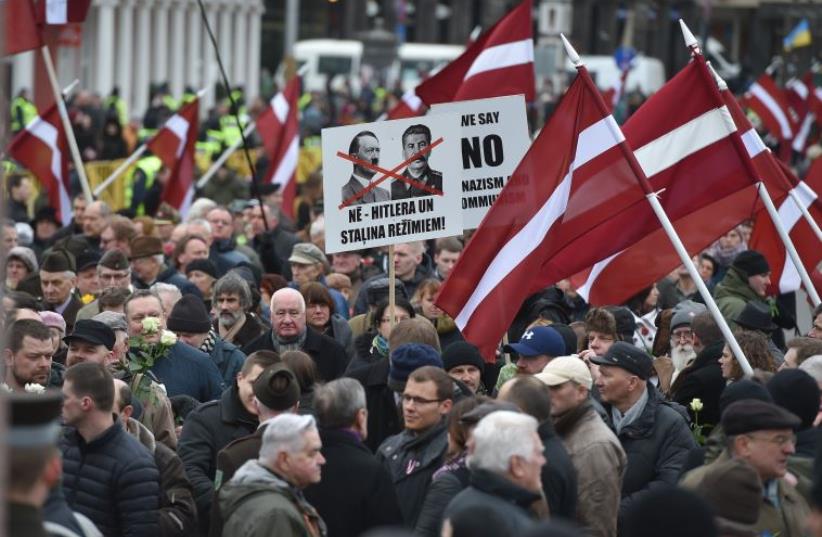 Veterans of the Latvian Legion, a force that was commanded by the German Nazi Waffen SS during WWII, and their sympathizers carry flags and posters as they walk to the Monument of Freedom in Riga, Latvia on March 16, 2016
(photo credit: ILMARS ZNOTINS/AFP)
Advertisement
Several hundred ultra-nationalists, including seven veterans of Nazi Germany’s Waffen SS, marched through Riga on the independence day of the Baltic nation of Latvia.The march Wednesday, a controversial affair which is Europe’s only annual event by Waffen SS veterans, drew a handful of counter-protesters from Latvia’s Jewish community and about 40 anti-fascist activists, including 20 Germans, Efraim Zuroff, the Israel director of the Simon Wiesenthal Center, told JTA in by phone from Riga.Latvian authorities detained five Germans who crossed over to the Baltic nation from Lithuania and prevented another one from boarding a plane bound for Latvia, Zuroff said. He added several Latvian lawmakers from the far right also participated in the march.Noting an absence of pressure by leading EU countries to curb the Latvian Nazi marches,” Zuroff said they were “a stain on the EU record of confronting the glorification of perpetrators of the Holocaust.”In the Baltic nations, collaborators who fought alongside the Nazis and participated in the annihilation of local Jewish communities are seen by many as heroes because they fought against the Soviet Union, which ruled the Baltic nations until the early 1990s. Lithuania officially considers the Soviet Union’s domination of its territory as a form of genocide, along with the Holocaust – a perception which is commonplace elsewhere in the Baltic countries as well.Russia under Vladimir Putin, Zuroff said, uses the Baltic nations’ ultranationalist marches in propaganda that he said is meant to falsely depict the populations of those countries as fascist. “They are not, but they are also derelict in confronting the canard that fighting alongside Nazis was patriotic, and that Soviet domination was in anyway comparable to the Holocaust,” Zuroff said.