Netanyahu to Haley: Thanks for combating ‘vilification of Israel at U.N.'

Netanyahu ended his letter by writing to Haley, “You are a great champion of the US-Israel alliance and a true friend of the Jewish people.” 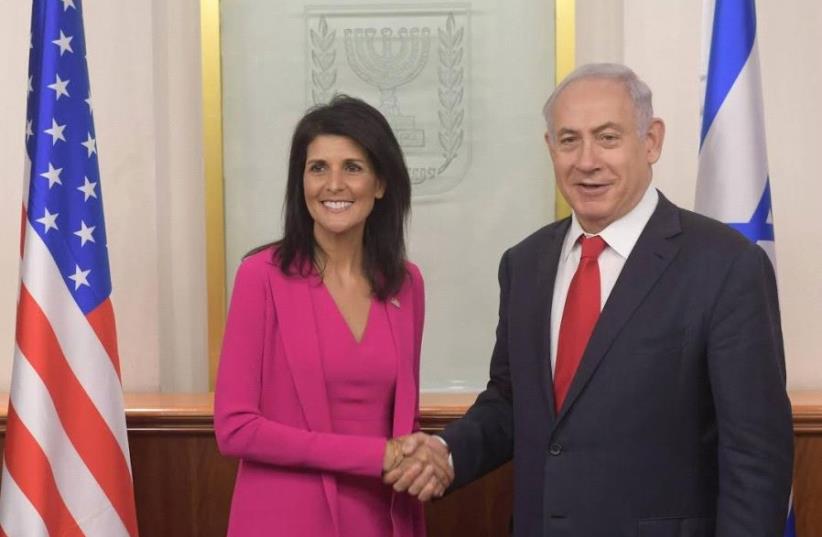 US Ambassador to the UN Nikki Haley meets with Prime Minister Benjamin Netanyahu in Jerusalem
(photo credit: AMOS BEN GERSHOM, GPO)
Advertisement
Israel is profoundly grateful “for everything you have done and continue to do for us,” Prime Minister Benjamin Netanyahu wrote US Ambassador to the UN Nikki Haley earlier this week.The letter to Haley on Sunday was sent to congratulate her on the occasion of receiving the Foundation for the Defense of Democracies’ Jeane J. Kirkpatrick Statesmanship Award. It also came just as Haley was taking over the rotating presidency of the UN Security Council for the month of September.“From your first days in office, you have taken on the task of combating the pathological vilification of Israel at the UN and have fought passionately against repeated attempts to isolate and delegitimize the Jewish State.”“I can think of no one more deserving of this special recognition,” Netanyahu wrote. “As the US Ambassador to the UN, you demonstrate everything that Ambassador Kirkpatrick stood for – a firm moral backbone, a strong sense of justice and an unbreakable commitment to the most fundamental values of freedom, democracy and human rights,” Netanyahu wrote. Kirkpatrick, the US ambassador to the world body from 1981 to 1985, was a staunch defender of Israel.Netanyahu ended his letter by writing to Haley, “You are a great champion of the US-Israel alliance and a true friend of the Jewish people.”
US: Iran misusing World Court with suit aimed at lifting sanctions, August 28, 2018 (Reuters)
A Related Video You May Like:
Meanwhile, Iranian Foreign Minister Mohammad Javad Zarif accused the US of planning to “abuse” the presidency of the Security Council after Haley announced Tuesday that Trump would chair a UN Security Council meeting on Iran’s violations of international law during the annual gathering of world leaders for the General Assembly meeting later this month.In a twitter post, Zarif wrote, “There’s only one UNSC resolution on Iran. @realDonaldTrump is violating it & bullying others to do same. Now he plans to abuse presidency of SC to divert a session item devoted to Palestine for 70 yrs to blame Iran for horrors US & clients have unleashed across M.E. #chutzpah.”While the Security Council frequently censures Israel, it is extremely unusual for it to have a meeting focusing on Iran’s actions in the region.