Mayor says two men scavenging trash near New Jersey train station found a suspicious package containing what could have been a live bomb in a wastebasket. 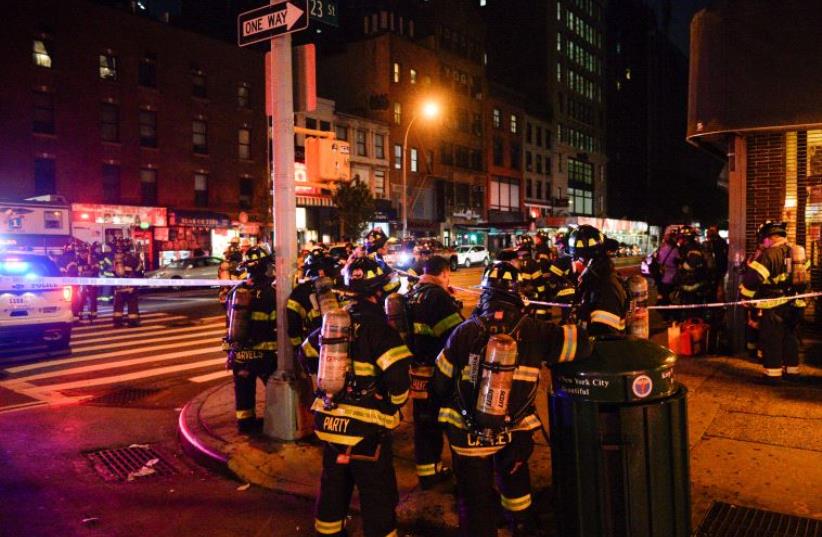 Scene of explosion in the Chelsea neighborhood of Manhattan, New York, U.S. September 17, 2016
(photo credit: REUTERS)
Advertisement
Police detonated a suspicious package early on Monday near a train station in Elizabeth, New Jersey, following concerns that it might contain a live explosive device, the city's mayor said.The incident came after the United States was shaken by three attacks at the weekend, including a Saturday night bombing that injured 29 in Manhattan and a stabbing incident at a Minnesota shopping mall that wounded nine.In Elizabeth, a city south of Newark, New Jersey, two men scavenging trash near the train station on Sunday evening found a suspicious package containing what could have been a live bomb in a wastebasket, Mayor Christian Bollwage said.The men reported the package to police after they "saw wires and a pipe," Bollwage told reporters. A Union County bomb squad drone determined the package "could be a live bomb" and an FBI bomb squad went to the site.A large explosion was heard early on Monday near the transit station, NBC News reported. On social media network Twitter, Bollwage confirmed that police had detonated the suspicious package. In a subsequent tweet, he confirmed that the explosion followed a police bomb robot's attempt to disarm the device.An FBI spokesman in Newark, Mike Whitaker, said agents were aware of the situation in Elizabeth. "We are responding with our local law enforcement partners," he added, but declined to give further details.New Jersey Transit Corp and Amtrak halted train services to the Elizabeth station as investigations continued, authorities said.A powerful explosion rocked Manhattan's popular Chelsea neighborhood late on Saturday after a pressure-cooker bomb packed with shrapnel detonated. A similar unexploded device was found a few blocks away later that night.
Amateur video captures aftermath of New York explosion
The Chelsea blast followed a pipe bomb explosion on Saturday morning along the route of a running race in the New Jersey beach town of Seaside Park. No one was injured in that blast, which is being investigated.Police in Union County, New Jersey, declined to comment.