Some 6,000 NYPD officers will be deployed in the different sites where festivities will be held. 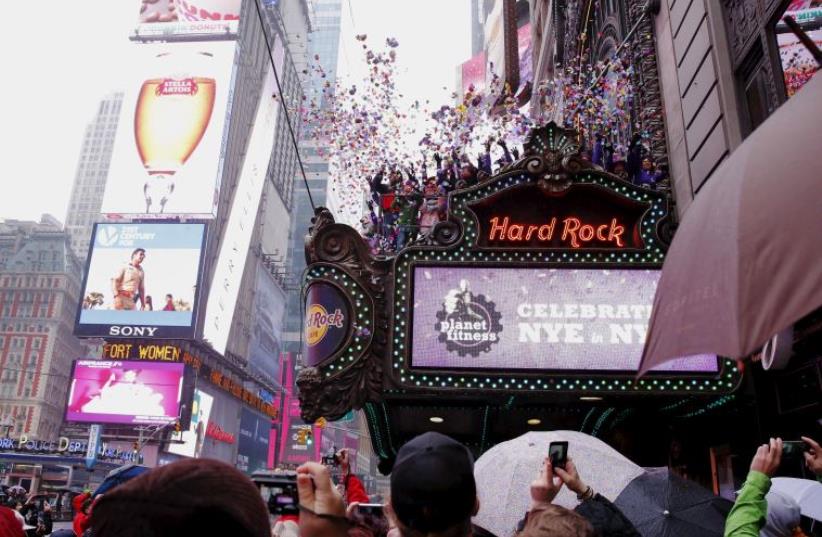 Members of the Times Square Alliance perform an "air worthiness test" for confetti that is similar to what will be used for New Year's Eve in New York December 29, 2015
(photo credit: LUCAS JACKSON / REUTERS)
Advertisement
NEW YORK - The New York Police Department will be tightening security around the city for New Year’s Eve celebrations on Thursday night, including in Times Square where hundreds of thousands of people are expected to come watch the annual crystal ball drop and concert broadcasted live on television for the occasionSome 6,000 NYPD officers will be deployed in the different sites where festivities will be held, which according to authorities is the most significant police presence in the city’s history. Among the policemen who will be on duty this New Year’s Eve are also undercover officers as well as members of the NYPD’s new counter-terrorism unit: the Critical Response Command, which was officially launched following the November 13th attacks in Paris and is trained to respond to a range of terrorist attack scenarios including active shooters.On Thursday night, several checkpoints will be put in place and spectators in Times Square will be screened at least twice using hand-held metal detecting devices. In addition, backpacks, duffle bags and alcohol will not be permitted in the area.Heavily armed counterterrorism teams and bomb-sniffing dogs will also be patrolling the crowded zones and the buildings that surround them as well as the 42nd street subway station. City officials have explained that these measures are being taken as caution, since there is no credible threat to New York City on December 31st. “This is the best prepared city in this country to stop terrorism, and people should rest assured that they will be very well protected on New Year’s Eve,” New York City Mayor Bill De Blasio said in an interview with a local radio station on Tuesday.Back in November, a video released by ISIS threatened New York City. The clip showed crowded areas such as Times Square, Fifth Avenue and Herald Square as well as footage of a man putting on a jacket over a suicide belt. After the attacks in Paris and San Bernardino in California, however, the FBI has also decided to increase the number of agents around the United States including in New York, Washington and Los Angeles.