Kim Jong Un inspected the command of the North's army on Monday, examining a plan to fire four missiles to land near the US Pacific territory of Guam, the official KCNA said in a report. 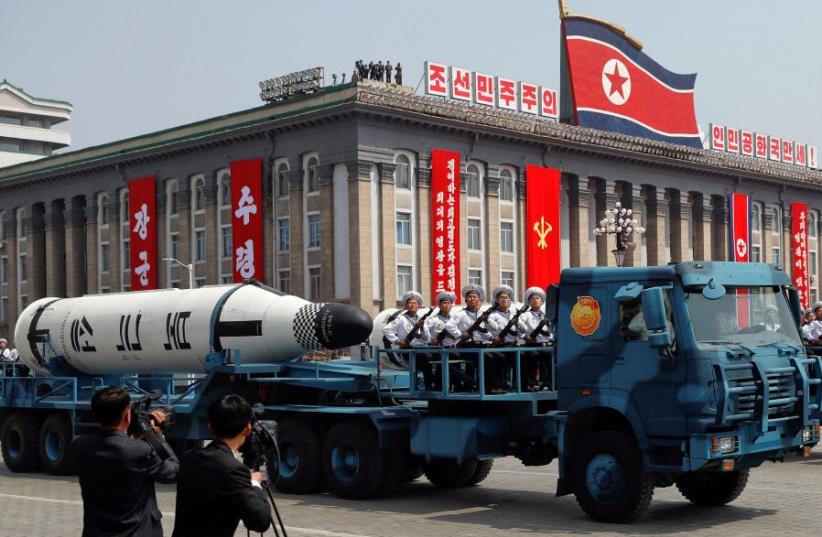 A North Korean navy truck carries the 'Pukkuksong' submarine-launched ballistic missile (SLBM) during a military parade marking the 105th birth anniversary of country's founding father, Kim Il Sung in Pyongyang, April 15, 2017
(photo credit: REUTERS)
Advertisement
SEOUL/WASHINGTON - North Korea's leader has delayed a decision on firing missiles towards Guam while he waits to see what the United States does next, the North's state media said on Tuesday, as South Korea's president said Seoul would seek to prevent war by all means.Signs of an easing in tension on the Korean peninsula helped stock markets rally for a second day running even as the United States and South Korea prepared for more joint military drills, which infuriate the North, and experts warned it could still go ahead with its provocative plan.In his first public appearance in about two weeks, North Korean leader Kim Jong Un inspected the command of the North's army on Monday, examining a plan to fire four missiles to land near the US Pacific territory of Guam, the official KCNA said in a report."He said that if the Yankees persist in their extremely dangerous reckless actions on the Korean peninsula and in its vicinity, testing the self-restraint of the DPRK, the latter will make an important decision as it already declared," the report said.The DPRK stands for North Korea's official name, the Democratic People's Republic of Korea.In photos released with the KCNA report, Kim was seen holding a baton and pointing at a map showing a flight path for the missiles appearing to start from North Korea's east coast, flying over Japan towards Guam. North Korea has often threatened to attack the United States and its bases and released similar photos in the past but never followed through.Pyongyang's plans to fire missiles near Guam prompted a surge in tensions in the region last week, with US President Donald Trump saying the US military was "locked and loaded" if North Korea acted unwisely.South Korean President Moon Jae-in said on Tuesday there would be no military action without Seoul's consent and his government would prevent war by all means."Military action on the Korean peninsula can only be decided by South Korea and no one else can decide to take military action without the consent of South Korea," Moon said in a speech to commemorate the anniversary of the nation's liberation from Japanese military rule in 1945."The government, putting everything on the line, will block war by all means," Moon said.Speaking to his Russian counterpart Sergei Lavrov, Chinese Foreign Minister Wang Yi said it was urgent the United States and North Korea "put the brakes" on mutually irritating words and actions to lower temperatures and prevent an "August crisis," China's Foreign Ministry said in a statement.
NUCLEAR DETERRENT
Japan will be seeking further reassurance from Washington in meetings between Japan's defense chief and foreign minister and their US counterparts on Thursday."The strategic environment is becoming harsher and we need to discuss how we will respond to that," a Japanese foreign ministry official said in a briefing in Tokyo."We will look for the US to reaffirm it defense commitment, including the nuclear deterrent."The Liberation Day holiday, celebrated by both North and South, will be followed next week by the joint US-South Korean military drills.North Korea has persisted with its nuclear and missile programs, to ward off perceived US hostility, in defiance of UN Security Council resolutions and sanctions.China, North Korea's main ally and trading partner, has repeatedly urged Pyongyang to halt its weapons program and at the same time urged South Korea and the United States to stop military drills to lower tensions.On Tuesday, Chinese Foreign Ministry spokeswoman Hua Chunying said the crisis was approaching a critical juncture and urged all sides in the standoff to help "put out the flames" and not add fuel to the fire.Hua said she noted comments by US Defense Secretary Jim Mattis and Secretary of State Rex Tillerson about using diplomacy to resolve the issue, saying China hoped these words can be put into action."We also call on North Korea to echo this in response," Hua told a daily news briefing.Asian shares rose for a second day on Tuesday and the dollar firmed after Kim's comments further eased tension and prompted investors to move back into riskier assets after a sharp selloff last week.Kim Dong-yub, a professor and a military expert at Kyungnam University's Institute of Far Eastern Studies in Seoul, urged caution in assuming North Korea was bluffing with its missile threats."There is no stepping back for North Korea. Those who don't know the North very well fall into this trap every time (thinking they are easing threats) but we've seen this before."The United States and South Korea remain technically still at war with North Korea after the 1950-53 Korean conflict ended with a truce, not a peace treaty.North Korea is currently holding three US citizens it accuses of espionage or hostile acts but now was not the right time to discuss them, KCNA cited a foreign ministry spokesman as saying in a separate report.Pyongyang has in the past used detainees to extract concessions, including high-profile visits from the United States, which has no formal diplomatic relations with North Korea.US officials have in recent days played down the risk of an imminent conflict while stressing their preparedness to respond militarily to any attack from North Korea.Mattis said on Monday the US military would know the trajectory of a missile fired from North Korea within moments and would "take it out" if it looked like it would hit the US Pacific territory."The bottom line is, we will defend the country from an attack; for us [US military] that is war," Mattis said.On Guam, home to a US air base, a Navy installation, a Coast Guard group and roughly 6,000 US military personnel, residents expressed some relief at the lessening of tensions."I'm reading between the lines that I don't see an imminent threat," Guam Lieutenant Governor Ray Tenorio told a media briefing in the island's capital of Hagatna.