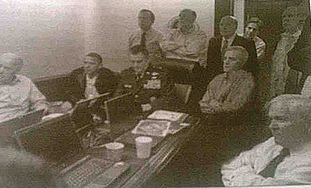 NEW YORK – The photograph showing President Barack Obama and staffers in the White House Situation Room carefully watching the raid in progress by US forces in Pakistan on the bin Laden compound last Sunday has been published far and wide.One Hassidic paper in Brooklyn, however, has chosen to alter the photo – excising Secretary of State Hillary Clinton and another female staffer from the picture.RELATED:
US: Bin Laden compound was al-Qaida command center
'CIA surveilled bin Laden compound for months'First reported in the blog failedmessiah.typepad.com, the photoshopped picture was published in the Yiddish newspaper Der Zeitung (The Time) on Friday, with empty spaces where Clinton had been sitting and where the female staffer had stood.The photograph was released by the White House with the following imprimatur: “This official White House photograph is being made available only for publication by news organizations and/or for personal use printing by the subject(s) of the photograph. The photograph may not be manipulated in any way and may not be used in commercial or political materials, advertisements, e-mails, products, promotions that in any way suggests approval or endorsement of the President, the First Family, or the White House.”Manipulations of the already-iconic photograph, however, have proliferated on Facebook, but those generally fall under the umbrella definition of satire and parody. However, the Der Zeitung edit is the one edit of the photo that has appeared in the context of the press.While Der Zeitung had no comment as to why it altered the picture, many conjectured that it was either because of concerns about immodesty, or strong feelings that women should not be in positions of power.“This is a bit silly,” one commentator wrote at failedmessiah. “Secretary of State Clinton was not dressed immodestly. There was no intent of objectification in the photo. Haven’t the editors got something better to do?”
Advertisement
Subscribe for our daily newsletter