"There's a possibility that there was a bomb on board. And we're taking that very seriously," Obama said in a radio interview. 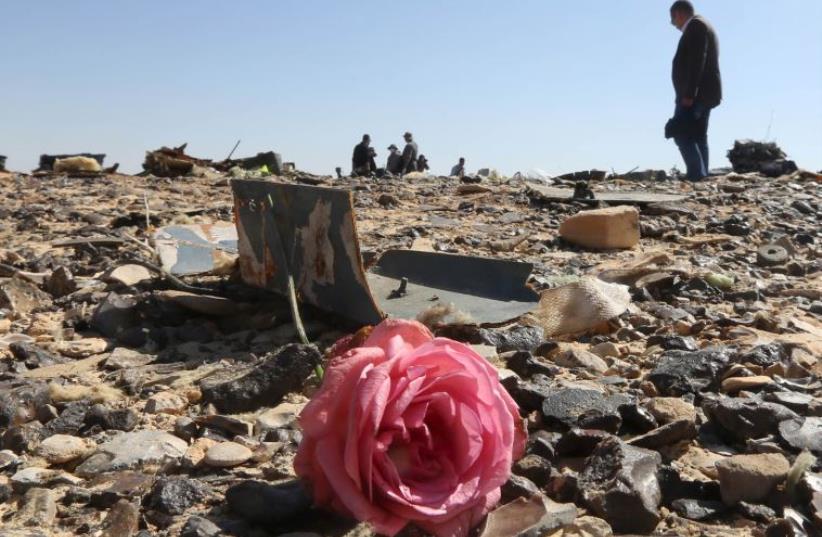 A flower is seen near debris at the crash site of a Russian airliner in al-Hasanah area in El Arish city, Egypt.
(photo credit: MOHAMED ABD EL GHANY/REUTERS)
Advertisement
US President Barack Obama said there is a "possibility" that the crash of a Russian passenger plane in Egypt was caused by a bomb on board the airliner, Obama told KIRO/CBS News Radio in Seattle on Thursday."There's a possibility that there was a bomb on board. And we're taking that very seriously," Obama said in the radio interview."We're going to spend a lot of time just making sure our own investigators and own intelligence community find out what's going on before we make any definitive pronouncements. But it's certainly possible that there was a bomb on board."Britain, Ireland, Germany and the Netherlands have suspended flights to and from Sharm al-Sheikh, leaving thousands of European tourists stranded in the Red Sea resort where the plane took off. A spokesperson for Cameron said later that flights from the resort destination to Britain would resume on Friday.Cairo said the decision to suspend flights was unjustified and should be reversed immediately.Britain said it was working with airlines and Egyptian authorities to put in place additional security and screening measures at the airport to allow Britons to get home.If a bomb brought down the Airbus A321, that would devastate Egypt's tourism industry, still recovering from years of political turmoil.On Wednesday, Britain said that the Russian plane that crashed in Egypt this week after taking off from the resort of Sharm al-Sheikh might have been brought down by an explosive device."While the investigation is still ongoing we cannot say categorically why the Russian jet crashed," Prime Minister David Cameron's office said in a statement."But as more information has come to light we have become concerned that the plane may well have been brought down by an explosive device," it added.Dmitry Peskov, Putin's spokesman, said Russian planes were still flying to and from Sharm alSheikh."Theories about what happened and the causes of the incident can only be pronounced by the investigation," Peskov said.Egypt's civil aviation minister, Hossam Kamal, said investigators had no evidence so far to support the explosion theory. Russian aviation agency Rosaviatsia said investigators would examine whether there was any explosive material on the plane.