Obama dines with Kenyan family after arriving in father's homeland 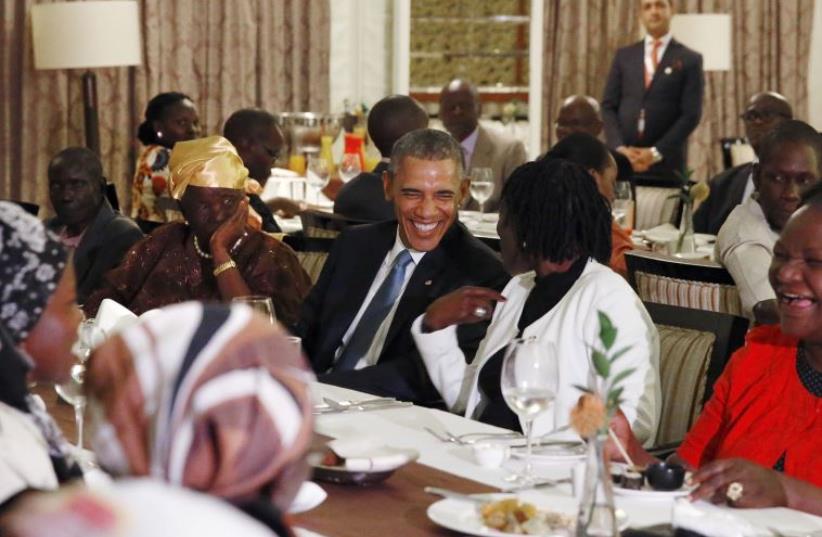 Obama attends private dinner with family members at his hotel restaurant after arriving in Nairobi July 24, 2015.
(photo credit: REUTERS)
Advertisement
NAIROBI - US President Barack Obama dined with his step grandmother, his sister and other extended family members after arriving in Kenya for his first presidential visit to his father's homeland on Friday.Obama's plane, Air Force One, landed in the evening in the Kenyan capital, where he will co-host a conference on boosting entrepreneurs in Africa before traveling on to Ethiopia.After being greeted by President Uhuru Kenyatta and other top Kenyan officials, Obama was whisked through the capital.Hours before Obama's arrival, police blocked major roads and emptied streets of traffic in the usually congested capital as part of a huge security operation.In the darkness, excited Kenyans lined parts of the route to his hotel, cheering as Obama's motorcade passed by.Once at his hotel, the president sat down with the woman he calls "Granny," also called "Mama Sarah," who helped raise his now deceased father as a child.Obama's half sister Auma Obama and a few dozen other extended family members related were also present.Wearing a suit and tie, he chatted amiably with the large family seated at long tables at a restaurant inside the hotel where he is staying.Obama's family connection to Kenya has cast a trip that is otherwise likely to focus on trade and counterterrorism issues in a personal light. He is not expected to travel to the village where his father is buried.Kenya is a vital ally of the West in the battle against the Somali Islamist group al Shabaab, and Obama is likely to focus talks in Nairobi on security cooperation.The al-Qaida-linked group was behind an attack on Nairobi's upscale Westgate shopping center in 2013, killing at least 67 people, as well as an attack in April at a Kenyan university near the Somali border that left 148 people dead.In Nairobi, Obama will preside at a Global Entrepreneurship Summit, pay tribute to victims and survivors of the 1998 U.S. embassy bombing and dine with Kenyatta, whose indictment by the International Criminal Court for crimes against humanity largely barred Obama from visiting sooner. Charges have been dropped.Deputy President William Ruto, still facing similar charges in The Hague-based court, was not at the airport reception ceremony. He denies having had a role in fomenting violence after the disputed 2007 election.In the year before that vote, Obama visited Kenya when he was still a senator.