The news of Scalia's unexpected death sets up a major political showdown between Obama and the Republican-controlled Senate over who will replace him just months before a presidential election. 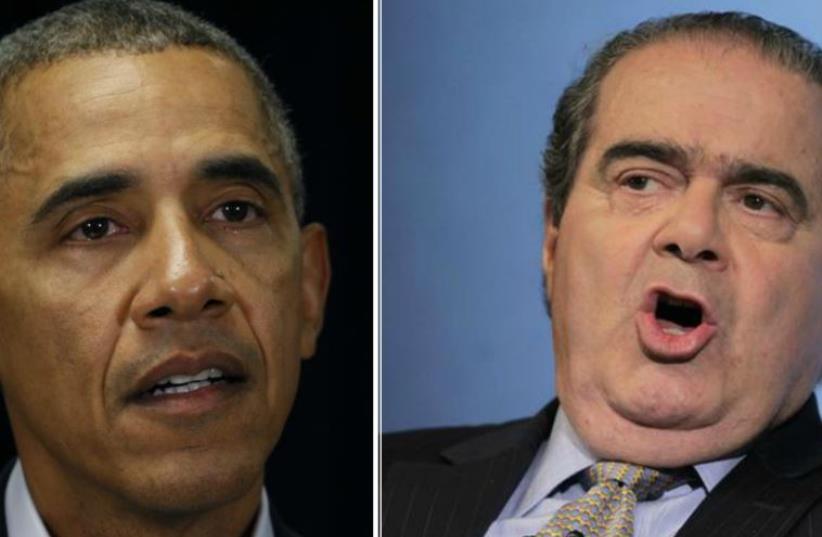 US President Barack Obama and the late US Supreme Court Justice Antonin Scalia.
(photo credit: REUTERS)
Advertisement
US President Barack Obama on Saturday vowed to select a replacement for the late conservative Supreme Court Justice Antonin Scalia after the judge was found dead at his Texas home earlier in the day. Obama called Scalia, who served on the nation's highest court for nearly 30 years, a "larger-than-life presence" and said he intended to nominate someone to fill the vacant seat before leaving the White House next January."I plan to fulfill my constitutional responsibility to appoint a successor in due time and there will be plenty of time for me to do so and for the Senate to give that person a fair hearing and timely vote," Obama told reporters in California.The news of Scalia's unexpected death sets up a major political showdown between Obama and the Republican-controlled Senate over who will replace him just months before a presidential election.Scalia, 79, was found dead at the Cibolo Creek Ranch resort in West Texas on Saturday. He died of natural causes, according to Presidio County Judge Cinderela Guevara, who went to the ranch and saw the body.Chief Justice John Roberts described his former colleague, who was known for his strident conservative views and theatrical flair in the courtroom, as an "extraordinary individual and jurist."Obama ordered flags at the White House and all federal buildings to be flown at half-staff.A number of leading Republicans, including Senate Majority Leader Mitch McConnell and Senate Judiciary Committee Chairman Chuck Grassley, immediately said they would oppose any attempt by Obama to nominate a new justice.The political battle lines sharpened later at the Republican presidential debate in South Carolina, where front-runner Donald Trump and several of his rivals said it should be up to Obama's successor to replace Scalia."Delay, delay, delay," said Trump, who urged McConnell to block any Obama nomination.Senator Ted Cruz of Texas said Scalia's death highlighted what was at stake in the election. "We're not going to give up the US Supreme Court for a generation by allowing Barack Obama to make one more liberal appointee."Democrats lined up to push for a speedy appointment, with Senate Minority Leader Harry Reid saying it should happen "right away."Obama could tilt the balance of the nation's highest court, which now consists of four conservatives and four liberals, if he is successful in pushing his nominee through the confirmation process.OPERA AND HUNTINGScalia, who grew up in New Jersey and graduated from Harvard Law School, was a leader of the "originalist" ideology that looks at the US Constitution through the lens of its framers' 18th century intentions.He was the first Italian-American on the court and a devout Roman Catholic who had nine children. An avid hunter who wrote the court's 2008 landmark opinion supporting gun rights, Scalia also was a close friend of liberal Justice Ruth Bader Ginsburg, with whom he shared a love of opera and often traveled.His replacement would be Obama's third appointment to the nine-justice court, which is set to decide its first major abortion case in nearly 10 years as well as key cases on voting rights, affirmative action and immigration.Waiting for the next president to make a nomination would leave Scalia's seat empty for at least 11 months, an unprecedented gap in recent decades.Obama's first two appointments to the court, liberals Sonia Sotomayor in 2009 and Elena Kagan in 2010, both experienced relatively smooth confirmation hearings in the Senate, which was then controlled by Democrats.With Republicans now in charge of the Senate and keen to exert their influence over the process, Obama is likely to be forced into picking a moderate with little or no history of advocating for liberal causes.The White House is also likely to consider whether to nominate a woman or a member of a minority group, or someone who fits into both categories.Among those mentioned within legal circles as a potential nominee is Sri Srinivasan, an Indian-American judge who has served on the US Court of Appeals for the District of Columbia Circuit since May 2013.It has been nearly 50 years since political wrangling between a president and Senate pushed a Supreme Court nomination into the next administration.In 1968, Chief Justice Earl Warren made clear his intention to resign and Democratic President Lyndon Johnson sought to elevate then-Associate Justice Abe Fortas, who had been a close confidant. Senate Republicans fought the nomination, claiming "cronyism," and Johnson withdrew it. The appointment fell to his successor, Republican Richard Nixon.