"Proposed requirements would provide no meaningful additional security for the American people." 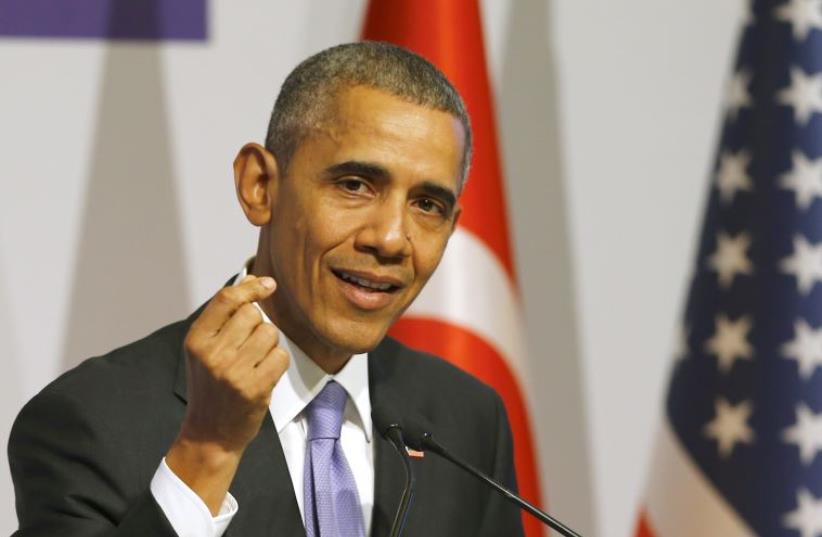 US President Barack Obama addresses a news conference following a working session at the Group of 20 (G20) leaders summit in Antalya, Turkey, November 16, 2015.
(photo credit: REUTERS)
Advertisement
WASHINGTON - US President Barack Obama would veto a proposal from Republican lawmakers in the US House of Representatives for additional scrutiny of refugees from Syria or Iraq, the White House said on Wednesday."This legislation would introduce unnecessary and impractical requirements that would unacceptably hamper our efforts to assist some of the most vulnerable people in the world," the White House said in a statement.The proposed requirements "would provide no meaningful additional security for the American people, instead serving only to create significant delays and obstacles in the fulfillment of a vital program that satisfies both humanitarian and national security objectives," the White House said.  Republican lawmakers defied Obama on Wednesday and set out plans to tighten screening of Syrian refugees following last week's Paris attacks, in a political fight that challenges America's view of itself as a refuge for downtrodden immigrants.Concerned about possible attacks in the United States after Islamic State killed 129 people in the French capital on Friday, the Republican chairman of a US House of Representatives security panel proposed additional scrutiny of refugees fleeing Syria or Iraq seeking to enter the United States.Reports that at least one of the Paris attackers was believed to have slipped into Europe among migrants registered in Greece prompted several Western countries to begin to question their willingness to take in refugees.Under Republican-backed legislation introduced in the House, no refugee from war-torn countries Iraq and Syria could enter the United States until top-level American officials assure Congress that they do not imperil national security.Americans are "uneasy and unsettled" over the events in Paris, said House Speaker Paul Ryan, a Republican."We are a compassionate nation. We always have been and we always will be. But we also must remember that our first priority is to protect the American people," Ryan said.Speaking at an Asia-Pacific summit in Manila, Obama accused Republicans of "hysteria and exaggeration of risk" in trying to make it more difficult for refugees to enter the United States."Slamming the door in the face of refugees would betray our deepest values. That's not who we are. And it's not what we're going to do," Obama later wrote on Twitter.Obama stood by a plan that the White House announced in September to allow 10,000 Syrian refugees into the United States within a year.Refugees from the four-year-old civil war in Syria who are seeking US entry already undergo a rigorous screening process that can take between 18 and 24 months, involving multiple US security agencies.The House is due to start debate on Thursday on a bill proposed by Michael McCaul, the Republican chairman of the House's Homeland Security Committee, that would make it even more difficult for those Syrians, as well as for Iraqi refugees.Under the bill, top US security officials - the Homeland Security secretary, the FBI director and the director of National Intelligence - would have to assure Congress that the refugees do not imperil national security.McCaul also proposes to tighten a visa waiver program that allows citizens of participating countries, including many in Europe, to travel to the United States without a visa.The Senate, where Republicans hold a smaller majority than in the House, would have to approve any legislation on refugees before it could take effect. Rhetoric there about the issue has been less heated than in the House.