Observing Ramadan? There's an app for that

By ASSOCIATED PRESS
AUGUST 11, 2010 14:04
Advertisement
PATERSON, NJ — The most ancient traditions of Islam are going high-tech, with a slew of modern offerings for those observing the holy month of Ramadan, which begins this week.Cell phone applications such as "iPray" or "iQuran" offer a beeping reminder of requisite prayer times, while the "Find Mecca" and "mosque finder" programs help the Muslim traveler in an unfamiliar city find the nearest place to pray. 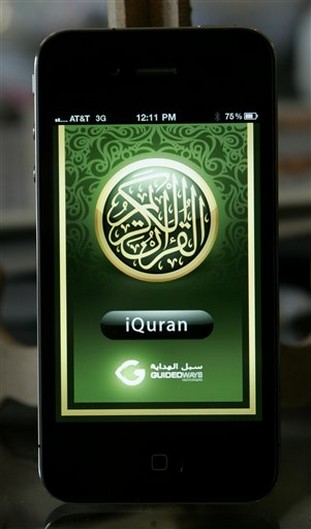 An IPhone displays an app called IQuran"When I saw these applications for the first time, I thought: this is amazing," said James Otun, who has several Islamic applications on his Apple iPhone and iPad. "Whoever came up with this idea: God bless him or her."The applications aren't just for Ramadan; there are Islamic-themed programs that help users find the nearest Costco offering foods prepared according to Islamic dietary rules, learn the correct Arabic pronunciations in a daily prayer, or count how many pages of the Quran they've read that day — all on a mobile phone.There also are applications, or apps, for the holy books of several other religions, from the Catholic Holy Bible to the Bhagavad Gita, a sacred Hindu scripture.The first time Sumeyye Kalyoncu heard the Adhan — or call to prayer — through surround-sound speakers on her iPhone dock, she was overcome with nostalgia for her native Turkey. Such applications are especially popular in the US, Kalyoncu said, as US mosques do not broadcast daily calls to prayer from external loudspeakers, as they do in Muslim countries."These are traditions and these have been in our lives for ages, like almost 15 centuries, so they seem very old," Kalyoncu said. "I think this is like combining together the technology and the things that we do daily."Kalyoncu uses an iPhone app called iPray Lite, keeping track of requisite daily prayers with a program that simulates the clicking sound of prayer beads or the turning wheel of a handheld metal counter Muslims use to keep count of prayer repetitions. Using headphones, the 24-year-old says she can now fulfill her daily spiritual obligations by counting prayers on her iPhone on the commuter bus to Manhattan from her Edgewater home.

Apple spokeswoman Trudy Muller said the company doesn't track the more than 225,000 apps for its phones by category so she doesn't know how many are Islamic-themed. The programs aren't just offered by Apple; Nokia has a Ramadan suite for its cell phones that consolidates everything worshippers need to know to observe Islam's holiest month, in which Muslims worldwide observe daily daylight fasting.Some apps are free. Those that are not generally range from about 99 cents to $2.99, although some are more expensive.The dates of Ramadan still are determined by the lunar calendar, and calculations can differ among Islamic communities around the world. In North America, many Muslims will mark the first day of Ramadan on Wednesday.Otun, a technology aficionado, says the apps he uses on his iPhone and iPad make him a more observant Muslim. From the beeping reminder to stop and pray during his busy schedule running a limo service, to an app that tells him which nearby restaurants serve food prepared within Islamic guidelines, Otun says there's no longer an excuse to live an unobservant life."If you forgot to pray, you might not be responsible, because you're human; you forget and you can make it up later," said Otun, 35. "But not now that you have those apps, that might change things in God's level."Otun's favorite application, called Find Mecca, is a compass-like program with an electronic indicator that changes from red to green when you've reached the requisite prayer angle of 58-degrees, Northeast, to ensure you're facing Mecca from any location — a requirement of all Muslims when praying.Otun said he was amazed to see an image of Mecca on his cell phone screen for the first time, and to realize he could carry a library of religious texts with him everywhere."iPhone makes you emotional," he said. "I can't carry 10,000 pages of books, now, you have it in your phone — it's priceless."
Advertisement
Subscribe for our daily newsletter