Two senior cabinet members from the province said it was becoming harder to persuade people - including committed supporters - to vote for the party. 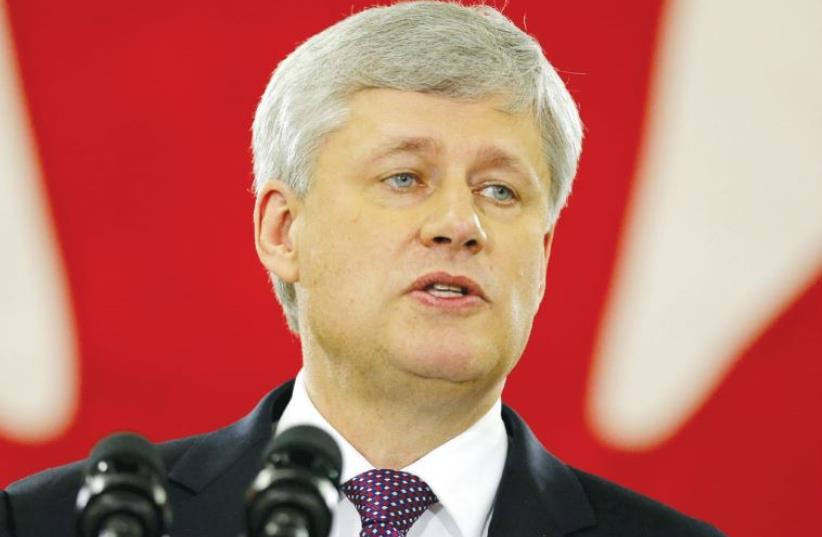 Canada's Prime Minister Stephen Harper speaks at a campaign stop in Toronto last week.
(photo credit: CHRIS HELGREN/REUTERS)
Advertisement
COLLINGWOOD, Ontario  - Voters are drifting away from Canada's ruling Conservatives in Ontario, the province that holds the key to the October 19 general election, and if the trend continues it will cost Prime Minister Stephen Harper his 10-year grip on power.A senior Conservative deeply involved in the campaign says that as of now, a dozen Ontario legislators or more could easily lose their seats as support for the party in some parliamentary constituencies is set to drop by up to 15 percentage points.The forecast shows the challenge for the right-of-center Conservatives in Ontario, which includes Toronto - Canada's largest city and financial hub. The province, the size of France and Germany combined, accounts for 36 percent of the seats in the new Parliament and no party can hope to win power without a strong foothold here.The Conservatives took 73 of the 106 seats in the 2011 election, cementing Harper's first majority. The number of Ontario seats will increase from 106 to 121 this time as the House of Commons expands to 338 seats from 308.Nationally, polls show two left-leaning parties, the Liberals and the New Democrats (NDP), tied with the Conservatives at around 30 percent each.Conservative voters say they are tired of the government after a decade in power and variously cite concerns about the sluggish economy, unhappiness over a scandal in Harper's office as well as increasing antipathy towards the prime minister and his take-no-prisoners political style.Two senior cabinet members from the province said it was becoming harder to persuade people - including committed supporters - to vote for the party.Labour Minister Kellie Leitch said the campaign in her Simcoe-Grey constituency north of Toronto was going "outstandingly well" but conceded that for some people, voting Conservative was "not a gut reaction any more."She explained: "I think people ... say they're a little fatigued." Still, she said that voting for the rival parties "are not options for them."Treasury Board Minister Tony Clement described the situation in his constituency of Parry Sound-Muskoka, about 200 km north of Toronto, as fluid and volatile and said some voters were genuinely grappling with what to do."All leaders have some millstones," he said in an interview, citing "the longevity of government" in Harper's case.Although Clement did not mention Harper as an issue, others are less reticent. The senior Conservative Party source said campaigners were discovering widespread unhappiness with the prime minister, who critics accuse of being dictatorial.And while Clement and Leitch are popular enough to survive a big drop in support, many other Conservative MPs are not.Some Conservatives interviewed by Reuters in the constituencies of both Clement and Leitch did not unearth much enthusiasm for the party or the prime minister."I'm tired of the games and the mudslinging," said Terry Denbok, 40, a church pastor. Asked about Harper, he replied: "I'm just over him."Denbok says he will not vote Conservative again and might back the Greens.Others are mulling a switch to the Liberals led by Justin Trudeau or the NDP of Tom Mulcair."I've voted Harper for the last 10 years and I'm one of the guys considering Mulcair. This is insane," said advertising salesman Alf Ens, 58. "And I'm not the only one. I think Harper has pissed off a lot of people."Ens said he was unhappy that Harper had adopted a strong pro-Israel stance in the Middle East.Ens lives in Waterloo, where Conservative legislator Peter Braid scraped a win in 2011 amid a wave of vote-splitting between Liberals and New Democrats that helped Harper. Braid would be vulnerable if Conservatives switched sides or stayed at home."I'm not sure their own people will turn up. There is no enthusiasm for the Conservative campaign," said Ipsos pollster John Wright. "Ontario is in play."Alarmed by the sluggish start, the Conservatives have turned to a high-powered Australian political strategist and will soon launch new attack ads, insiders say.The Conservatives are well-funded and no one is writing them off yet. Leitch, who opened a large Collingwood campaign office on Saturday, is pitted against a New Democrat who is working out of his home because money is tight."There's still a lot of time, five and a half weeks, in which to convince people that now is not the time for massive change in government ... so we're going to have to work like heck to get that message out," said Clement.But another person familiar with Conservative strategy said officials were worried in particular about Toronto area legislators Costas Menegakis in Richmond Hill and Ted Opitz in Etobicoke Centre.Another key area is the 905 region around Toronto, named after its dialing code. The constituencies overwhelmingly backed Harper in 2011 but Wright says the Conservatives are now tied there with the Liberals.Even Finance Minister Joe Oliver could be vulnerable in his Eglinton-Lawrence constituency. Harper has been lending his support, appearing there for two recent events.