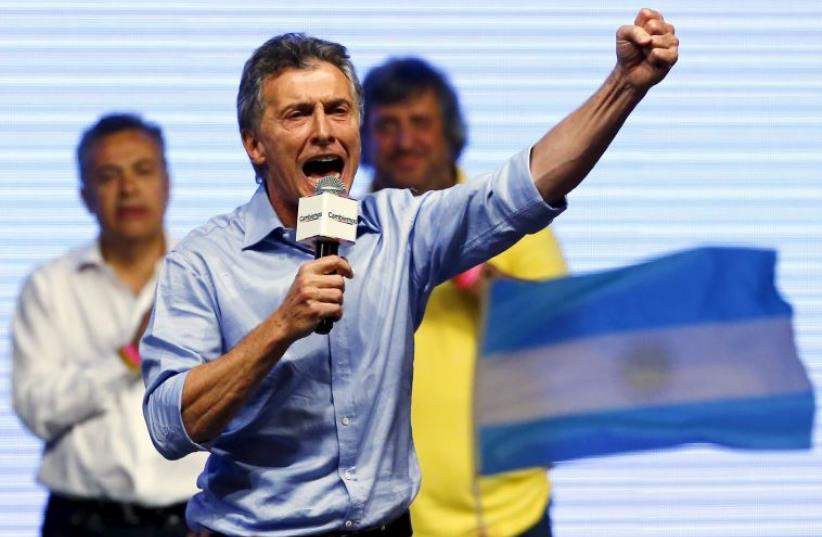 Conservative opposition candidate Mauricio Macri comfortably won Argentina's presidential election, November 22, 2015
(photo credit: REUTERS)
Advertisement
BUENOS AIRES - Conservative opposition candidate Mauricio Macri won Argentina's presidential election on Sunday after promising business-friendly reforms to spur investment in the struggling economy.Macri's supporters swarmed to the Obelisk in the heart of Buenos Aires' theater district for a giant street party as subdued ruling party candidate Daniel Scioli conceded defeat.Argentina's election body said Macri had 52.1 percent of votes and Scioli had 47.9 percent with returns in from 91.5 percent of polling stations."The is the beginning of a new era that has to carry us toward the opportunities we need to grow and progress," Macri told supporters at his headquarters, which pulsed with Latin music and was festooned with white and sky-blue balloons, the colors of the Argentine flag.In a sign of Argentines' weariness with a spluttering economy, rising crime and corruption, Macri had gone into the run-off election with a comfortable lead in opinion polls over Scioli, the candidate of outgoing President Cristina Fernandez.During the campaign, Scioli warned that Macri's orthodox policies are similar to those that preceded Argentina's 2001-02 economic crisis, which tossed millions of people into poverty.But with economic growth slowing sharply and inflation running at more than 20 percent, voters were keen for change.Macri promises to set Latin America's third biggest economy on a more free-market course after a combined 12 years of leftist populism under Fernandez and her late husband and predecessor Nestor Kirchner.Barred from seeking a third straight term, Fernandez will leave office with Argentina deeply divided between those who back her protectionist policies and defense of worker rights and others who blame her policies for weak economic growth.PRESIDENT'S SHADOWA moderate within the Peronist movement, Scioli failed to win over middle-ground voters after struggling to step out of Fernandez's shadow during the election campaign.His talk of maintaining generous social welfare programs and energy subsidies while making only gradual changes to the capital and trade controls that have hobbled the economy hurt his credentials as a candidate for change."Scioli did not manage to differentiate himself from Fernandez and so people stopped seeing him as a change of style and went over to Macri," said political analyst Mariel Fornoni.The shift in power in Argentina may reverberate across South America where other left-leaning governments, such as Venezuela and Brazil, are also up against the end of a decade-long commodities boom and allegations of financial mismanagement.Macri was favored by investors and Argentine asset prices were expected to rise on Monday."Foreign investors got their wish. Macri's win signals a decisive break with the Kirchner-Fernandez legacy of creditor confrontation and economic mismanagement," said Washington-based emerging markets analyst Gary Kleiman."Bond and stock markets will enjoy the afterglow into the new year, but the inherited currency and fiscal mess and direct and portfolio investor antagonism may linger with the Peronists' continued political hold on parts of the government apparatus."Scioli's apparent defeat amounted to an indictment of Fernandez's stewardship of the economy and her confrontational style.She often takes to the airwaves to mock her critics with fiery speeches. She denounces holdout creditors suing the country over defaulted debt as "vultures" and invokes the memory of her late husband as the guiding light of her policies.Fernandez is known as a political fighter committed to her vision of a government actively involved in helping low-income families, and she may return as a presidential candidate in 2019.She appeared on television in recent weeks appealing to voters to ensure that government funding of education, healthcare and programs for poor mothers remains.