Gunman reportedly seen at popular LGBT club on dozens of occasions in the years leading up to the attack. 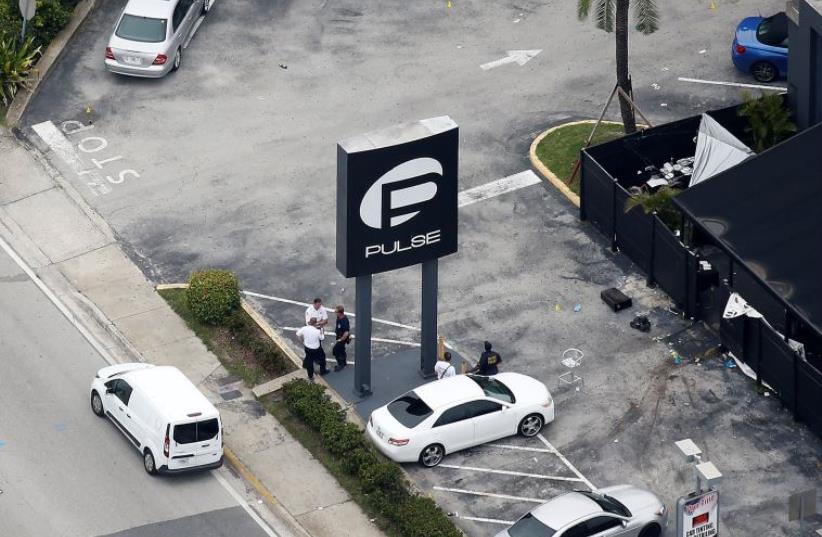 Investigators work the scene following a mass shooting at the Pulse gay nightclub in Orlando Florida, U.S. June 12, 2016.
(photo credit: REUTERS)
Advertisement
Since the attack at an Orlando nightclub early Sunday morning, those with alleged connections to gunman Omar Mir Seddique Mateen have began speaking out, revealing that he had purported links to the LGBT social scene prior to the mass shooting.Numerous regulars at the popular LGBT club Pulse have come forward stating that Omar had previously been seen at the club multiple times. "Sometimes he would go over in the corner and sit and drink by himself, and other times he would get so drunk he was loud and belligerent," the Orlando Sentinel on Monday quoted witness Ty Smith as saying. When questioned, Orlando Police Chief John Mina stated that he had no information about the alleged sightings. Another regular also stated to the Los Angeles Times that he had been messaging with the gunman on and off for a year via a gay chat and dating app, however the two never met in person until the day of the attack. Pulse club-goer Kevin West stated that he had turned his phone over to the FBI in order to review the correspondence between the two. The gunman's father, Mir Seddique, has told NBC news that the club was deliberately chosen and that the sight of two men kissing angered Omar. He also added that the incident "has nothing to do with religion."Evidence and statements have been turned over to the FBI. The Orlando nightclub killer had expressed sympathy for a variety of Islamist extremists, including groups in the Middle East that are sworn enemies, the FBI said on Monday, as a picture began to emerge of the angry, violent man who carried out America's deadliest mass shooting.US authorities said they had found no direct links between Islamic State and Mateen, the US -born son of Afghan immigrants who killed 49 people at a gay nightclub in Orlando on Sunday.Mateen, 29, was shot dead by police who stormed the Pulse club with armored cars after a three-hour siege. In 911 calls during his rampage, the killer expressed allegiance to Islamic State leader Abu Bakr al-Baghdadi. Reuters contributed to this article.