I spent a few days last week meeting with migrants across Paris, in an attempt to find out who they were. 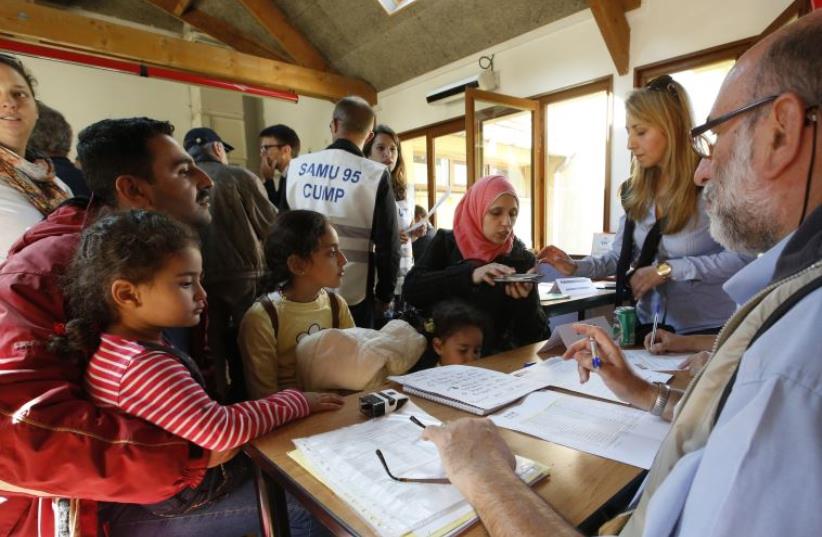 Refugees from Syria and Iraq arrive at the Hubert Renaud center in Cergy-Pontoise near Paris
(photo credit: REUTERS)
Advertisement
PARIS – This summer, the City of Light became an open city, with a constant and growing influx of migrants from the Middle East and North Africa who found refuge in its welcoming centers and shelters, but also on the banks of the Seine, the sidewalks of its busy streets, its park benches and its principal squares.I spent a few days last week meeting with migrants across Paris, in an attempt to find out who they were. I went first to a former hotel management high school turned recently into a migrant center, right across from the Guillaume Budé junior high, which was opening its doors for the start of the school year. Concerned parents had demanded that the access to the school be separated from that to the migrant center. Their demand was met.The migrant center is located in the 19th arrondissement, an area where Jews, North Africans, Africans and Asians live side by side. At the center’s entrance, the French and EU flags fly above a poster reading: “Our expectation to stay alive is our right.”An estimated 400 migrants have taken refuge there since police cleared various makeshift camps around Paris, one of them under La Chapelle metro station, say Mathilde and Clarisse, two young ladies who helped create a solidarity movement in the wake of these evictions.“The migrant take care of themselves, we merely help them by organizing and distributing donations from locals,” they explain, alluding to a seemingly endless stream of people pouring into the center with bags of clothes, food, cleaning products and medicine.“We also provide them with French lessons, and in return they teach us Arabic.”In the center’s playground, children and youths play basketball or soccer. Afghans favor cricket. A little plot of land has been planted with vegetables and next to it is a small chicken coop. On the fence surrounding the school, lines have been spread to dry laundry.Graffiti covers every wall, whether of the building facade or in the corridors and classrooms.“Refugees Welcome,” “Refugees are survivors,” “Solidarity,” one reads.Fathia, a young Muslim lawyer, came from the outskirts of Paris to help migrants apply for refugee status.Catherine Taylor, 68, a human rights lobbyist, and her daughter Rachel, 27, came dragging two larges suitcases filled with men’s clothing. “As Jews, we understand what being a migrant means,” she says.Karine Popillaud, a book critic, has popped in to drop off a supply of medicine to a volunteer doctor set up in a infirmary.“We give Doliprane [Paracetamol] to cancer patients,” Popillaud says.“Our leaders should take responsibility for playing with fire in the Middle East, selling weapons to Saudi Arabia, a farright country which finances Islamic State. France has a terrible part in this business.”Not far from there, migrant youths are roaming around the vast Place des Fêtes, one of the district’s main squares, as female regulars of the Village des Fêtes brasserie gather on its terrace and exchange good wishes for Rosh Hashana On the other side of the city, at the Quai d’Austerlitz under the Charles de Gaulle Bridge, I am on my way to a party when I stumble upon a migrant camp.Some 200 tents have been erected at the bottom of the François Mitterrand National Library.On one wall, I read in English: “Roof for all migrants at Austerlitz.”Many youths type on their computer keyboards. Moussa, 22, came from Mali 11 months ago and leaves in a nearby center.“I don’t live among them [under the bridge], but I am just like them,” he says as he walks with me. “We are all destitute.”Omar, from Sudan, has been there for two months: “We are waiting for papers and houses.”My presence starts to draw a lot of attention, I am asked for money, to show my press card; I end up leaving.The next day, a court order: The Austerlitz camp must be dismantled within the next few days. Paris Mayor Anne Hidalgo promised to relocate the migrants.Until recently, France was criticized for neglecting the influx of migrants, concerned by its own high level of unemployment, but this started to change after the publication of the pictures of three-year-old Aylan Kurdi whose body was swept ashore on a beach in Turkey on September 2. A surge of solidarity has swept France.The migrant issue was at the center of President François Hollande’s latest press conference on Monday. France will accept 24,000 refugees in the next two years, he announced.On Saturday, Interior Minister Bernard Cazeneuve met with mayors whose cities have offered to welcome refugees.Also, a national coordinator, Prefect Kleber Arhoul, has been appointed to organize the general reception of the migrants all over the country.