Duda honors former members of Zegota, founded to save Jews in Holocaust. 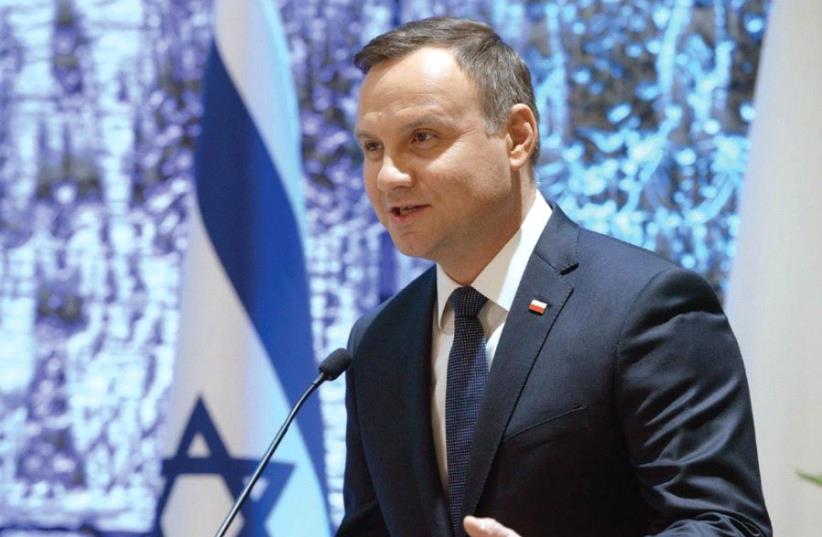 POLAND’S PRESIDENT Andrzej Duda speaks at an event at the King David Hotel in Jerusalem
(photo credit: MARK NYMAN/GPO)
Advertisement
President of Poland Andrzej Duda announced an initiative to designate March 17 as an annual national day of remembrance for Poles who saved Jews during World War II.Duda announced that he would propose a bill promoting the initiative, during an event on Wednesday held at the Presidential Palace in Warsaw to mark the 75th anniversary of the inauguration of Zegota, the Polish Council to Aid Jews, an underground resistance group active in German-occupied Poland between 1942 and 1945.During the event, Duda awarded medals to several members of the organization who are still alive.Polish President Andrzej Duda, wife Agata Kornhauser-Duda, and Jonny Daniels (credit: From the Depth)
They included: Leszczynski Stanislaw, 95, who saved 15 Jews in Siedlce; Wiktor Rogozinski, 94, who saved five Jews in Sosnowiec and who lost three brothers at the hands of the Nazis; Marianna Krasnodebska, 91, who saved six Jews by supplying them food in the Warsaw Ghetto; head of the association of the Polish Righteous Anna Bando, 88, who saved four Jews in Zoliborz; and Jozef Walaszczyk, 97, who saved the lives of 40 Jews in Warsaw.Jonny Daniels, CEO of Holocaust remembrance organization From the Depths, was a guest at the event. He told The Jerusalem Post that some of the stories of these Righteous Gentiles – non- Jews who risked their lives to save Jews – have never been recorded.Last month his team launched a project called Silent Heroes to film Righteous Gentiles telling their stories, a project supported by a grant from the British government.“It really is a race against time,” Daniels remarked, in reference to the age of the saviors.