PM reportedly boasted to Norwegian PM of son's relationship with Norwegian girl during meeting in Davos; Yair Netanyahu studies with girlfriend at IDC.

By JPOST.COM STAFF
JANUARY 26, 2014 10:17
Netanyahu at Jewish Federations GA 370
(photo credit: Screenshot)
Advertisement
Norwegian media proudly reported on Sunday that a Norwegian woman studying at the Interdisciplinary Center in Herzilya was dating Prime Minister Binyamin Netanyahu's son Yair. According to the report in the Dagen newspaper, when the prime minister met Norwegian Prime Minister Erna Solberg for a diplomatic meeting in Davos last week, he boasted of his son's new relationship. 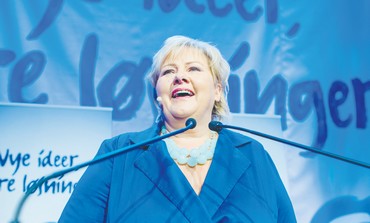 Photos posted on the girlfriend's Facebook show the couple in what appears to be a trip to Norway. Sandra Leikanger is reportedly from Grimstad, Norway. A source close to Netanyahu's son confirmed that Leikanger is not Jewish.
The anti-assimilation group LEHAVA wrote on Monday following the media reports: "Bibi's son has found a Gentile! His father is proud of him and gives legitmacy to the assimilation and destruction of the Jewish people." The prime minister's second wife, Fleur Cates, was also not Jewish and converted to Judaism. Netanyahu and Cates were married between 1981-84. Israeli media picked up the story, curious about what security measures were put in place if in fact Yair had traveled to Norway for a visit with his new love interest.