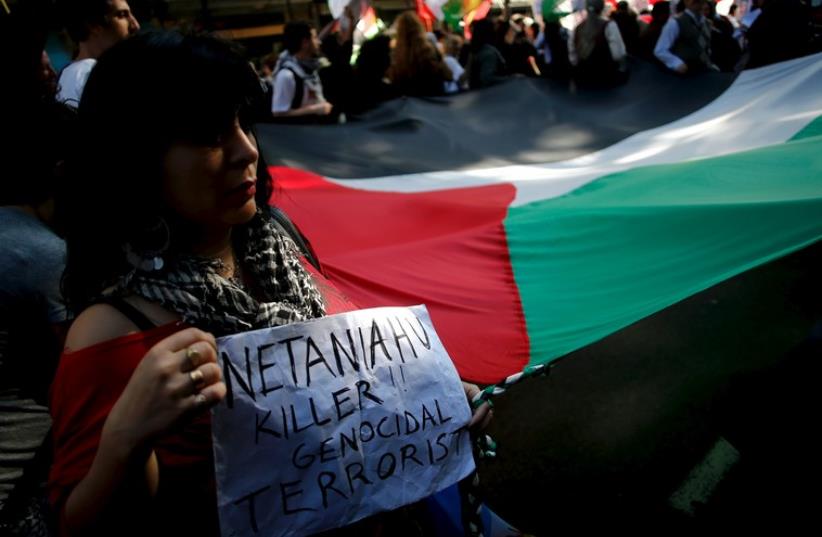 A protester holds a sign against Prime Minister Benjamin Netanyahu during a pro-Palestinian demonstration outside the Israeli Embassy in Buenos Aires, October 30, 2015
(photo credit: REUTERS)
Advertisement
Demonstrators condemn the Israeli government during a demonstration outside the country's embassy in Buenos Aires as tensions between Israelis and Palestinians flare in the Middle East.Members from Palestinian solidarity organizations and their supporters marched to the Embassy of Israel in Buenos Aires on Friday to call for peace and to condemn the Israeli government amid a recent wave of violence between Palestinians and Israelis.The demonstrators carried Palestinian flags and posters and banners blaming the Israeli government for the bloodshed that has rocked the region.
Demonstration at Israeli embassy in Buenos Aires
The international relations secretary for Argentina's Latin American Integration Movement of Social Expression (MILES), Rafael Araya Masry, called on Buenos Aires to denounce Israel for the violence and on citizens to boycott the country."We are calling on the national government to bluntly condemn this recent Israeli escalation of repression and death that the Israeli government is carrying out. We call for backing and action to decisively promote and fulfill, continually more, a boycott, disinvestment and sanctions against the state of Israel in all areas of our daily lives from cutting academic cooperation to not buying any product originating in Israel in the supermarkets. If we did it against apartheid in South Africa, so should we do it even stronger against Israeli apartheid," he said.Violence this month, the worst since the 2014 Gaza war, has in part been spurred by religious and political tensions over the Temple Mount site sacred to both Jews and Muslims.Violence continued in the region on Friday when knife-wielding Palestinians attacked and wounded three Israelis in Jerusalem and the West Bank with police saying they had shot dead two assailants, in a further wave of violence spurred partly by tensions over the Temple Mount complex.Since the latest hike in violence began on October 1, 11 Israelis have been killed.Of the 64 Palestinians reported killed in recent unrest, 37 were assailants attempting to attack Israelis.