Allegations of espionage and cyber attacks by Iran come at a particularly sensitive time for Germany, which is to preserve the 2015 nuclear accord with Iran. 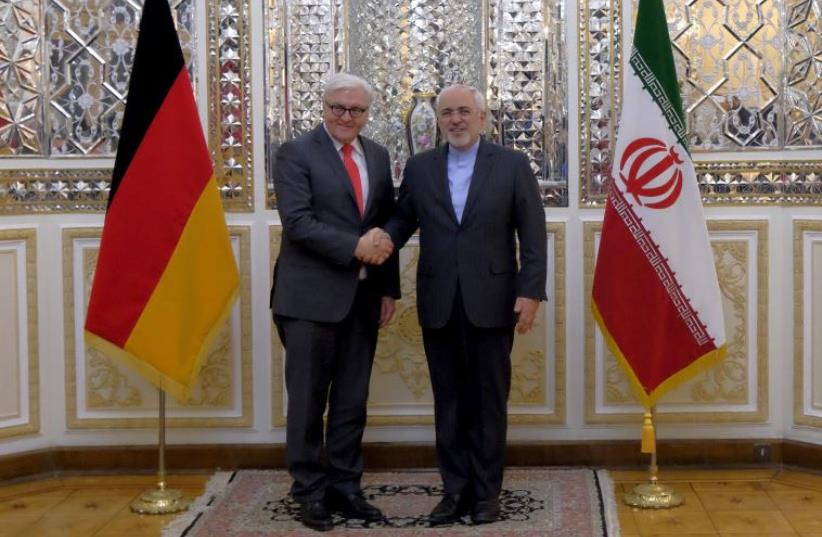 Iranian Foreign Minister Mohammad Javad Zarif (R) shakes hands with his German counterpart Frank-Walter Steinmeier in Tehran February 2, 2016
(photo credit: REUTERS)
Advertisement
BERLIN - A 50-year old Afghan-German dual national who worked for the German military was detained on Tuesday on suspicion of passing data to an Iranian intelligence agency, Germany's federal prosecutor's office said on Tuesday.The suspect, identified only as Abdul Hamid S., will go before a judge later Tuesday, the prosecutor's office said."Abdul Hamid S. is strongly suspected of having worked for a foreign intelligence agency. The suspect was a language expert and cultural adviser for the Bundeswehr (German armed forces). In this capacity, he is believed to have passed insights to an Iranian intelligence agency," it said in a statement.A spokesman for the German defense ministry said it was aware of an espionage case involving a member of the military, but gave no further details.German news magazine Der Spiegel reported that the suspect had access to sensitive information in his role with the military, including possible data on troop deployments in Afghanistan.The German military often uses native-born interpreters to accompany troops on patrol in Afghanistan.Intelligence officials in Germany and Europe have raised concerns about what they see as Iran's increasing espionage activities, including through cyber attacks.In July, Germany's domestic intelligence agency reported that Iran had expanded its cyber attack capabilities and posed a danger to German companies and research institutions.Allegations of espionage and cyber attacks by Iran come at a particularly sensitive time for Germany, which is battling along with other European countries to preserve the 2015 nuclear accord with Iran, from which the United States has withdrawn.In January, the foreign ministry summoned Iran's ambassador to reprimand Tehran for spying on individuals and groups with close ties to Israel