Kiev has now handed the Kremlin "evidence" for Putin’s claim that Russia is facing off against fascists. 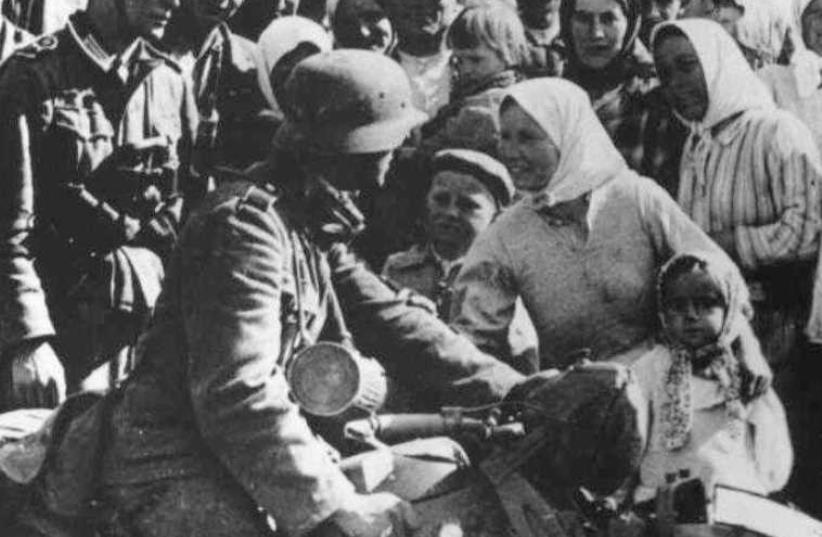 Ukrainians greeted the Nazis as liberators during the Second World War
(photo credit: Courtesy)
Advertisement
As Ukraine continues its battle against separatists, corruption and a collapsing economy, it has taken a dangerous step that could further tear the country apart: Ukraine’s parliament, the Supreme Rada, passed a draft law last month honoring organizations involved in mass ethnic cleansing during World War Two.The draft law - which is now on President Petro Poroshenko’s desk awaiting his signature - recognizes a series of Ukrainian political and military organizations as “fighters for Ukrainian independence in the 20th century” and bans the criticism of these groups and their members. (The bill doesn’t state the penalty for doing so.) Two of the groups honored - the Organization of Ukrainian Nationalists (OUN) and the Ukrainian Insurgent Army (UPA) - helped the Nazis carry out the Holocaust while also killing close to 100,000 Polish civilians during World War Two.The law is part of a recent trend of contemporary Ukrainian nationalism promoted by those on the extreme right to break with the country’s Communist past and emphasize Ukraine’s suffering under the Soviet regime. In addition to the moral problem of forbidding the criticism of Holocaust perpetrators, the law hinders Ukraine’s European ambitions - and validates Russian President Vladimir Putin’s claims that the country is overrun by neo-Nazis.The OUN was founded in 1929 as a revolutionary organization designed to liberate Ukraine from Soviet rule and create an independent Ukrainian state. Many OUN leaders were trained in Nazi Germany, and the group’s philosophy was influenced by Nazi racial theorists such as Alfred Rosenberg. OUN literature, for example, declared the need to “combat Jews as supporters of the Muscovite-Bolshevik regime… Death to the Muscovite-Jewish commune! Beat the commune, save Ukraine!”The OUN fought both the Nazis and the Soviets, and many Ukrainian nationalists have argued that the OUN was primarily a national liberation movement. But while the OUN’s core goal may have been the creation of an independent Ukrainian state, along the way its members were responsible for terrible atrocities.Starting with a pogrom in Lviv shortly after the Nazis invaded the Soviet Union, OUN militias - with the support of the Nazis - embarked on a killing spree in Western Ukraine that claimed the lives of tens of thousands of Jews. After the Nazis dissolved these militias, many of their members joined the Ukrainian Auxiliary Police in German service, where they received weapons-training and became one of the most important instruments of the Holocaust in Belarus and Western Ukraine.By 1943 the OUN had seized control of the Ukrainian Insurgent Army (UPA), a Ukrainian nationalist paramilitary group, and declared itself opposed to both the retreating Germans and the oncoming Soviets. Although no longer in Nazi service, the UPA nevertheless continued to target and kill Jews, herding them into labor camps for execution. The UPA also engaged in the mass ethnic cleansing of Poles during this time, killing nearly 100,000 people.
Even after the Red Army pushed the Germans from Ukraine in the summer of 1944, the UPA continued to fight a partisan war against Soviet forces well into the 1950s, before it was finally crushed by the massive power of the Red Army. It is this legacy of sacrifice that explains the Rada’s decision to pass a law honoring the OUN and the UPA.This law echoes a recent trend of glorifying right-wing Ukrainian nationalist organizations with controversial pasts. Under former Ukrainian President Viktor Yushchenko, a number of leading Ukrainian nationalists were honored with a memorial at Babi Yar - site of the single-worst massacre of Jews during the Holocaust. Yushchenko also bestowed the highest government honor of “Hero of Ukraine” upon the controversial former OUN leader Stepan Bandera - a step roundly condemned by the chief rabbi of Ukraine, the president of Poland and the European Union.More recently, radical nationalists played a key role as “shock troops” on the Maidan, and the anti-government camp was full of OUN-UPA flags and cries of “Glory to Ukraine! Glory to the heroes!” - chants that originated with the OUN. Currently, a number of OUN-UPA apologists occupy important government positions, including the minister of education, the head of the Security Service of Ukraine and the director of the Ukrainian government’s Institute of National Memory. Even Poroshenko has gotten into the act, laying a wreath in honor of the OUN at Babi Yar last year.The draft law has a number of downsides beyond the moral problem of giving the OUN and UPA a free pass for atrocious crimes. Most obviously, making criticism of Holocaust perpetrators illegal is not compatible with Ukraine’s European ambitions. It is natural that many Ukrainians would wish to define themselves in opposition to the former Soviet Union, but as a budding democracy, banning criticism of any organizations - particularly those with such dark pasts - is the wrong way to build national identity.Kiev also must remember that its conflict with Putin’s Russia is taking place in cyberspace as well as the Donbass. Kiev has now handed the Kremlin “evidence” for Putin’s claim that Russia is facing off against fascists. Not surprisingly, Russian state-owned media outlets have had a field day condemning the law.Perhaps the worst effect of this law is the way it would split the country. Eastern and western Ukrainians already possess widely diverging views on recent political events such as the collapse of the Soviet Union and the Maidan revolution. The law would only exacerbate these regional differences. Historically, support for the “OUN-cult” originated primarily in the western Ukrainian regions of Galacia and Volhynia, where they are seen as heroic freedom fighters against Soviet oppression. Eastern Ukrainians, by contrast, grew up viewing these groups as Nazi collaborators to be feared and condemned rather than celebrated.The Rada’s passage of this law has already greatly harmed Ukraine. It is now up to Poroshenko to mitigate the damage by vetoing it. Josh Cohen is a former USAID project officer involved in managing economic reform projects in the former Soviet Union. He contributes to a number of foreign policy-focused media outlets and tweets at @jkc_in_dc .