French-Canadian university student was the sole suspect in a shooting at a Quebec City mosque and was charged with the premeditated murder of six people, Canadian authorities said. 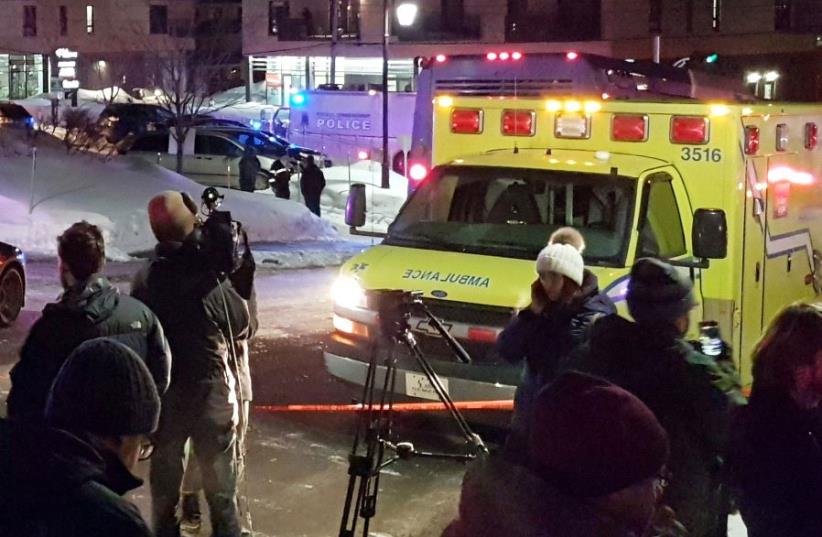 Multiple people killed in Quebec mosque shooting
(photo credit: REPRODUCTION)
Advertisement
A French-Canadian university student was the sole suspect in a shooting at a Quebec City mosque and was charged with the premeditated murder of six people, Canadian authorities said on Monday, in what Prime Minister Justin Trudeau called "a terrorist attack."Court documents identified the gunman in the attack on Sunday evening prayers as Alexandre Bissonnette, 27, and charged him with six murder counts and five counts of attempted murder with a restricted weapon. Police said he acted alone. The slightly-built Bissonnette made a brief appearance in court under tight security wearing a white prison garment and looking downcast.Alexandre Bissonnette, a suspect in a shooting at a Quebec City mosque, is seen in a Facebook posting (Reuters)Prosecutors said all of the evidence was not yet ready and Bissonnette, a student at Université Laval, was set to appear again on Feb. 21. No charge was read in court and Bissonnette did not enter a plea.
Canadian Prime Minister Justin Trudeau condemns the attack on a Quebec City mosque that killed six people on Sunday.
Among the six men killed were a butcher, a university professor, a pharmacist and an accountant, according to police and Canadian media.The government of Guinea said in a statement that two of its citizens were among those killed in the mosque attack.Police declined to discuss possible motives for the shooting at the Center Culturel Islamique de Québec.Bissonnette was not previously known to police, but a Facebook post by the group "Welcome to Refugees - Quebec City" said Bissonnette was known in online circles as a supporter of far-right French politician Marine Le Pen and was described by a former classmate as a "nerdy outcast." The online profile for Bissonnette showed a wide variety of interests.On his Facebook page, he indicated he liked Le Pen, US President Donald Trump, the separatist Parti Quebecois as well as Canada's left-wing New Democratic Party, the Israeli Defense Forces, heavy metal band Megadeth and pop star Katy Perry.