"It makes my blood boil to think that anyone should use this image in any way to impugn the extraordinary record of service of Her Majesty to this country," London mayor writes in newspaper. 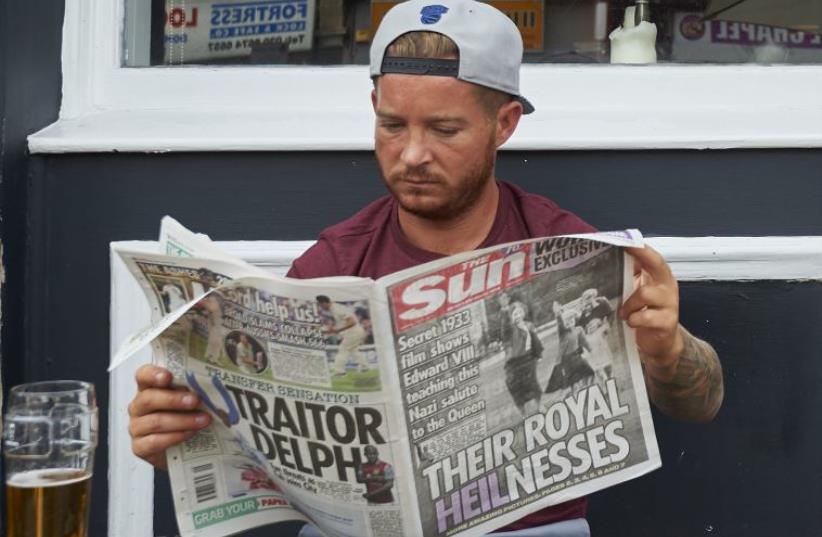 A man reads The Sun showing photo of the young Queen Elizabeth II giving Nazi salute.
(photo credit: NIKLAS HALLE'N / AFP)
Advertisement
LONDON - A grainy 82-year-old image of a seven-year-old Elizabeth offering what appears to be a brief Nazi salute has touched some of Britain's deepest obsessions: a mania for monarchy and a fascination with World War Two.Rupert Murdoch's top-selling Sun tabloid devoted seven pages to what it billed as a "world exclusive" but stressed the 17-second black-and-white film from the year Adolf Hitler came to power did not reflect badly on the 89-year-old monarch.Under the headline "Their Royal Heilnesses," The Sun said the film showed the future Edward VIII instructing his nieces, the present Queen Elizabeth, and her three-year-old sister, Princess Margaret, how to perform the Nazi salute.True to her reputation for avoiding blatant displays of emotion or opinion during her more than six decades on the throne, Elizabeth has not deigned to comment publicly though Buckingham Palace scolded The Sun.Such is Elizabeth's popularity and influence that the story led the BBC's flagship radio news program on Saturday and has elicited anger from supporters in a swathe of comment across the domestic media."It makes my blood boil to think that anyone should use this image in any way to impugn the extraordinary record of service of Her Majesty to this country," London Mayor Boris Johnson wrote in The Daily Telegraph newspaper."I hope that the Queen and her family will be fortified by the huge outpouring of love and support from the commonsensical mass of the British people, who can see this for exactly what it is: the innocent actions of a seven-year-old child."Johnson, who last year published a biography of Winston Churchill, gave a brief outline of delusions some in British elite had in the 1930s about Hitler's true intentions ahead of a war that would sap British power, wealth and blood."Some 82 years on from the shooting of that film, journalists are exploring the attitudes of the royal family towards Adolf Hitler's regime in Germany," wrote media commentator Roy Greenslade in the Guardian.BRITISH ROYALS

Though it would emerge from the war as an almost bankrupt former imperial power trapped in a Cold War between Soviet Russia and the United States, Britain's role in defeating the Nazis remains a great source of pride for many Britons.Royal bravery in the face of German bombing raids became a theme of British domestic propaganda during the war: Elizabeth's parents, George VI and the Queen mother, became symbols of British defiance."When Buckingham Palace was bombed on 13 September 1940, the Queen Mother famously said: 'At least we can now look the East End in the face,'" Robert Jobson, royal editor of the Evening Standard wrote."It would go down in history as the day the Luftwaffe came closest to claiming the ultimate trophy - the life of George VI," Jobson said.The Sun said it had published the images to provide an insight into "the warped prejudices" of Edward, who renounced the throne in 1936 to marry Wallis Simpson, a twice-divorced American socialite.Asked if Prime Minister David Cameron shared Buckingham Palace's disappointment at the publication, Cameron's spokeswoman said: "I don't think the prime minister has anything really to add to the debate there has already been on this."In the film, a copy of which The Sun said it had received from a source, Elizabeth and her sister show little apparent understanding of the salute's significance as a sign of obedience to Hitler.Buckingham Palace is investigating the possible source of the film, which came from the queen's personal family archive. The Sun quoted historians urging an opening up of the Royal Archives, which it said could stay secret for ever.Edward, whose pro-German sympathies would fuel decades of speculation about his true loyalties, raises his arm, as does his sister-in-law, the Queen Mother. Edward was succeeded by his younger brother, George VI, Elizabeth's father.An opponent of Russia's Bolshevik rulers who killed Tsar Nicholas II in 1918, Edward visited Germany in 1937 and met Hitler just months after the Luftwaffe bombed the town of Guernica during the Spanish Civil War and Jews had been banned from many professions in Germany.