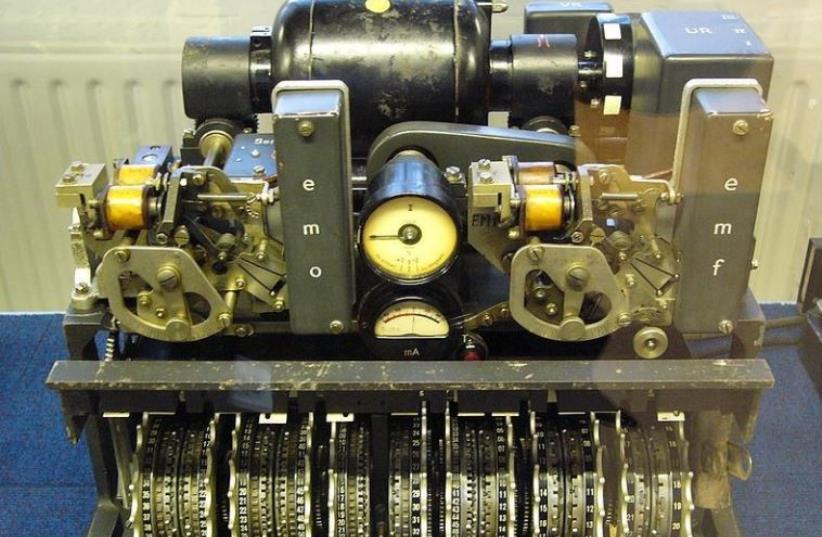 A Lorenz SZ42 cipher machine on display at Bletchley Park museum [File]
(photo credit: Wikimedia Commons)
Advertisement
A top secret Nazi coding device that encrypted communications between Adolf Hitler and his high-ranking officials was sold on eBay for just £9.50 ($13.89), British media reported Sunday.Volunteers from Britain's National Museum of Computing (NMC) spotted an ad last week on the online auction site for the rare WWII-era Lorenz SZ42 cipher machine, which serves as the latest-found component of Hitler's complete set of coding devices. “I think it was described as a telegram machine, but we recognized it as a Lorenz teleprinter,” the British Guardian quoted NMC volunteer John Whetter as saying. The encryption device had been gathering dust in the garden shed of an Essex resident, who believe the historic device to be a gadget. After spotting the sale ad, museum volunteers called the seller and arrived to her home to inspect the machine. “The person took us down the garden to the shed and in the shed was the Lorenz teleprinter in its original carrying case,” Whetter told the Guardian. They snapped it up for £9.50. After cleaning the machine, museum researches reportedly confirmed that the device was a genuine military-issue teleprinter, stamped with a swastika and military serial number. As the system's electric motor remains the only missing component of the machine, the UK's National Museum of Computing has called for help in finding the missing part. While the German used the famous Enigma system to send signals traffic to the front lines during the war, the Lorenz coding system was more complex and used in top echelon communications. British codebreaker and mathematician Bill Tutte eventually cracked the Lorenz device, a move that was credited with leading to the war's end and breakthroughs in modern computing. According to the British Telegraph, the recovered Lorenz cipher will be united with another on on loan from Norway's Armed Forces Museum to mark the anniversary of D Day. Only four such systems are known to exist now, as historians believe German forces destroyed the majority of the 200 manufactured teleprinters as they retreated at the end of WWII.