Previously, athletes who did not represent a country were not allowed to compete. 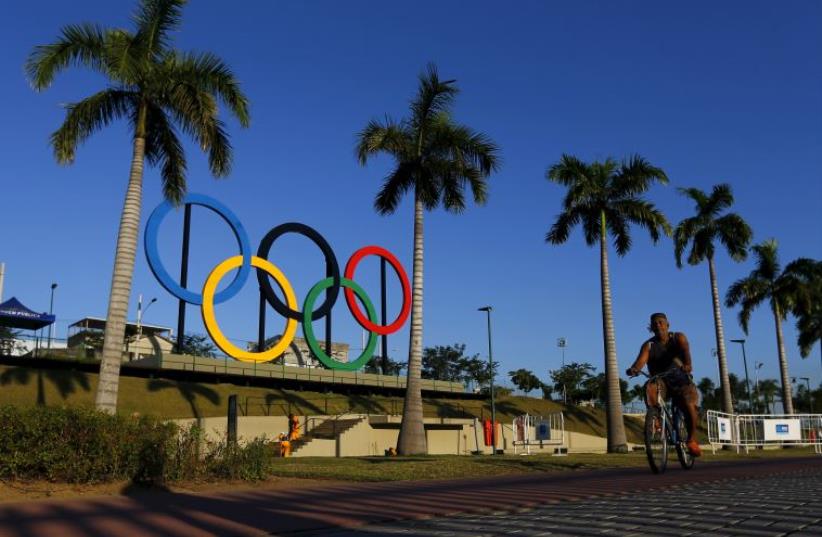 A man exercises next to the Olympic rings placed at the Madureira Park ahead the Rio 2016 Olympic Games
(photo credit: REUTERS)
Advertisement
A team of refugees that will compete at this year's Rio de Janeiro Olympics could number as many as 10 athletes, International Olympic Committee (IOC) President Thomas Bach on Wednesday.The team, which was officially approved by the IOC Executive Board and called Team of Refugee Olympics Athletes (ROA), will be made up from a pool of 43 prospective Olympians, already identified by the IOC and supported with funds to train."Today I am happy to announce the creation of the Olympic Team of refugee Olympic athletes," Bach said at a news conference."The IOC has officially launched this team of refugee Olympic athletes. This team will be greeted during the Olympic Games like all the other teams of national Olympic committees. This team will enjoy all the privileges like the other teams and athletes and by welcoming the team of refugee Olympic Athletes to the Olympic Games Rio 2016, we want to send a message of hope for all refugees of the world. These refugee athletes have no national team to belong to, they have no flag to march behind, they have no national anthem to be played, therefore we will welcome these refugee athletes to the Olympic Games with the Olympic flag and with the Olympic anthem. They will have a home together with all the other 11,000 athletes from 206 national Olympic Committees in the Olympic Village."Nomination criteria included sporting level, official United Nations-verified refugee status and personal situation and background, the IOC said."I think we are all touched and moved by the magnitude of the current world refugee crisis. This is why we started to identify refugee athletes who could potentially qualify for the Olympic Games and I am pleased to inform you that today we have 43 promising athletes identified, whom we now assist with our programs of Olympic solidarity," Bach said.Later he indicated that he expected a team of five to 10 athletes from the 'promising athletes' might qualify for the Games.Hundreds of thousands of refugees, many from Syria, have crossed via Turkey and Greece into Europe.The plight of those fleeing conflict, as well as economic migrants escaping poverty, has polarized opinion in Europe, with the amount of new arrivals stretching the European Union's asylum system.Previously, athletes who did not represent a country were not allowed to competeROA will be housed in the athletes' village along with all other national teams and will enter the stadium as the penultimate team at the opening ceremony, ahead of the host nation.The athletes and the sports they will compete in will be named at the next IOC executive board meeting in June.