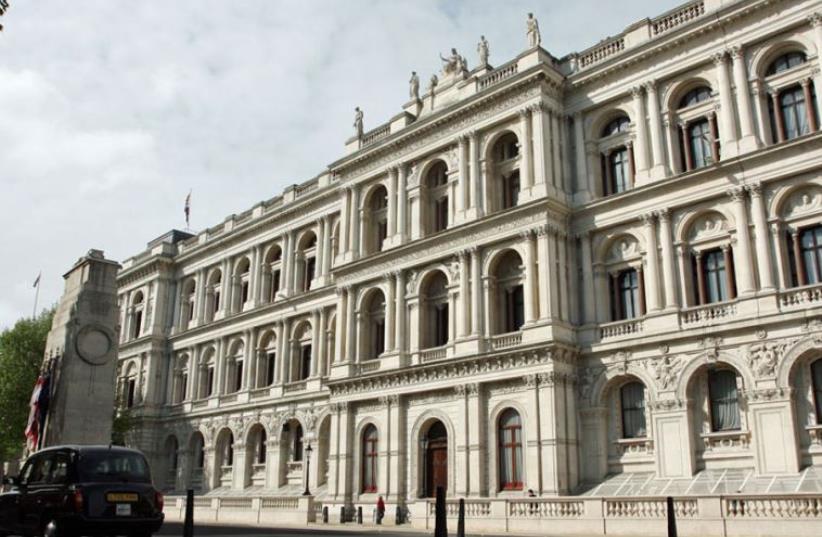 The Foreign & Commonwealth Office's main building in Whitehall, London
(photo credit: Wikimedia Commons)
Advertisement
The British government delayed taking action against Iraq's budding chemical weapons program in the 1980s partly because UK exporters had business ties to the industry, according to Foreign Office documents reviewed in a report by The Guardian. The secret file entitled Chemical Weapon Manufacture in Iraq, containing newly released papers from 1983, show that diplomats were aware of Baghdad's covert technology program. The report noted that the UK documents were written before the regime of then president Saddam Hussein began using poison gas extensively during the Iran-Iraq war resulting in the death of tens of thousands of Iranians.    One of the documents in the file was a telegram from the ambassador to Iraq in 1983 Sir John Moberly indicating the "manufacture and use of mustard gas by the Iraqi army." Moberly noted that a British company may be connected to the manufacturing of the weapons.  “The UK company Weir Pumps has supplied a number of pumps to Indian contractors, Somdat Builders, who are building a factory at Samarra to manufacture pesticide,” the ambassador wrote.  He added that Weir Pumps, had been frustrated in its attempts to discover technical information about the project.“It would therefore seem fairly certain that part of the Samarra pesticide factory may also be used to produce materials for chemical warfare, including the manufacture of mustard gas,” Moberly wrote.  The British Foreign Office arms control department declined to impose export restrictions on Iraq, The Guardian noted. The report cited a longer Foreign Office memorandum that considered whether it was “feasible” or “desirable” to intervene.  An internal letter in the Foreign Office indicated that there was no “non-proliferation regime” banning chemical weapons, and noted: “Britain alone could take limited action to control exports, but this would do little good. Global action might eventually be effective but would probably require public presentation of our evidence and would be very slow. Given that the Iraqi program is already far advanced, I am skeptical about the feasibility of effective action.”“Iraq is acting within her rights . . .and this has a bearing on the desirability of taking action against her,” the correspondence read.   The Guardian noted that the Chemical Weapons Convention, banning the production, stockpiling and use of chemical weapons did not come into force until 1997."Our own position on chemical weapons exports is not invulnerable," the writer stated. Echoing information from the ambassador Moberly's telegram,the letter read that a relevant factor in not changing UK export policy was that "a British company, Weir Pumps, has apparently supplied pumps to the Samarra factory under the impression that they were for use in making pesticides.”  A senior official wrote in April 1983 that the UK should take no action at the UN security council or the international court of justice on the Iraqi chemical weapons issue, according to the report.