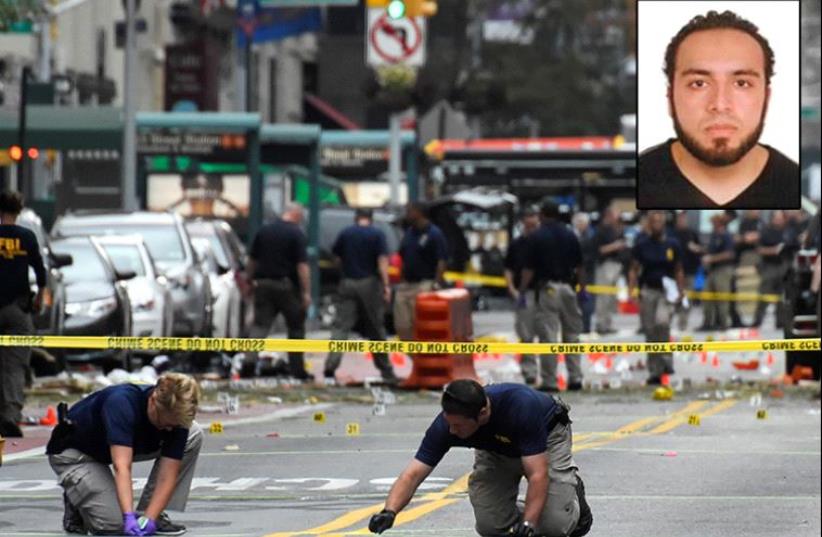 Ahmad Khan Rahami photo on scene of explosion in New York
(photo credit: REUTERS)
Advertisement
Ahmad Rahami, the person being sought in the explosions in New York and New Jersey, was taken into custody by police in Linden, New Jersey, CNN and an NBC affiliate reported, citing law enforcement officials. According to law enforcement officials the suspect was taken in after a shootout. CNN also cited New York Governor Andrew Cuomo as suggesting possible links between the similar explosives found in New York and New Jersey over the weekend.
Amateur video captures aftermath of New York explosion
A law enforcement officer told CNN that investigations into the blasts have revealed possible linkage to a terror cell operating in both East Coast states. Early on Monday, police detonated a suspicious package near a train station in Elizabeth, New Jersey, following concerns that it might contain a live explosive device, the city's mayor said.The incident came after the United States was shaken by three attacks at the weekend, including a Saturday night bombing that injured 29 in Manhattan and a stabbing incident at a Minnesota shopping mall that wounded nine.A powerful explosion rocked Manhattan's popular Chelsea neighborhood late on Saturday after a pressure-cooker bomb packed with shrapnel detonated. A similar unexploded device was found a few blocks away later that night.The Chelsea blast followed a pipe bomb explosion on Saturday morning along the route of a running race in the New Jersey beach town of Seaside Park. No one was injured in that blast, which is being investigated.