When it comes to the major questions of whether countries care more about guns or butter, the SIPRI survey shows that the world still prefers guns, but it increasingly prefer high-tech guns. 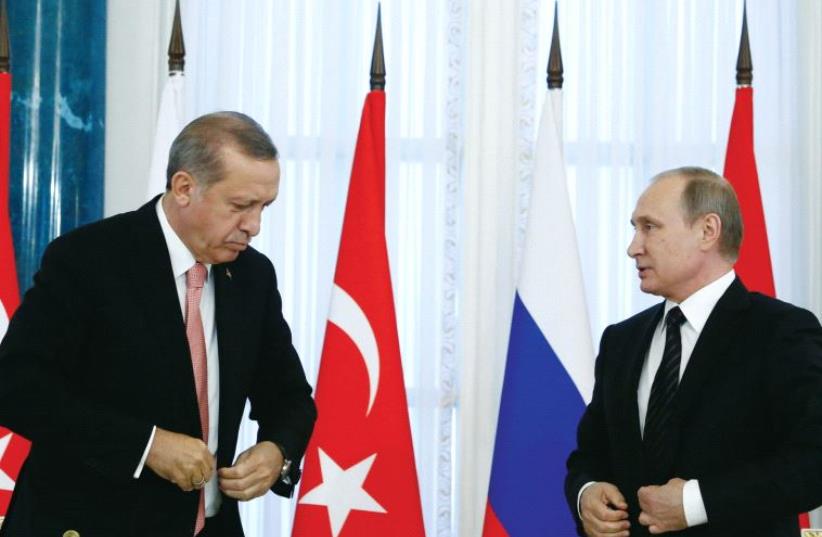 Russian President Vladimir Putin (right) and Turkish President Tayyip Erdogan attend a news conference following their meeting in St. Petersburg on August 9
(photo credit: REUTERS)
Advertisement
Russia is becoming a major arms producer, the second largest in the world according to a new survey of the global arms industry released by Stockholm International Peace Research Institute (SIPRI). Turkey’s arms industry is also increasing in size, while Israel has three companies in the top 50 of arms-producing companies in the world.Total arms sales in the world have largely remained the same in the last decade. In 2017 around $398 billion in sales were booked by what SIPRI defines as the top 100 major military service companies. The companies making all the guns, planes and other hardware are largely concentrated in Western Europe and the US. The US accounts for 57% of all sales while Russia comes in a distant second at 9.5%. The only non-European countries that make up major sellers are Israel, Japan, India and South Korea.Three Israeli companies appear in the top 50 companies globally. SIPRI estimates that Elbit Systems sold $3.39 billion in 2017 while Israel Aerospace Industries sold $3.53 billion. Rafael, ranked 45th in the world on the list, sold $2.58 billion. Per capita Israel has the largest arms industry in the world, however according to SIPRI its industry’s sales did not increase last year, in fact it was one of the few big countries that had a decrease. Russia, in contrast, increased its sales by 8.5 percent. Almaz-Antey, with $9 billion in sales, is the heart of the Russian arms industry. It produces air defense system, including the technology behind the S-400 which Russia has been shopping throughout the Middle East and elsewhere. Turkey is also seeking to become a major arms manufacturer, according to the study. It’s Aselsan company booked $1.4 billion in sales in 2017. Aselsan makes electronics, including radars. Like many companies that are expanding their sales in the defense industry, the big money is now in technology, not just heavy weapons systems such as tanks. Radar and avionics and air defense are among the items that make for huge profits. For instance one Patriot battery might cost $1 billion according to CNBC, while an S-400 could cost $500 million and a THAAD air defense battery would be $3 billion.Because of these costs, large and sophisticated countries like the US take a major part of the cake when it comes to arms sales. Companies such as Lockheed Martin, which makes the F-35, and Boeing, which makes the F-15, and Raytheon, which makes missiles, account for the largest sellers. Other major companies include BAE Systems in the UK as well as Northrop Grumman, General Dynamics.When it comes to the major questions of whether countries care more about guns or butter, the SIPRI survey shows that the world still prefers guns, but it increasingly prefer high-tech guns and air defense systems.