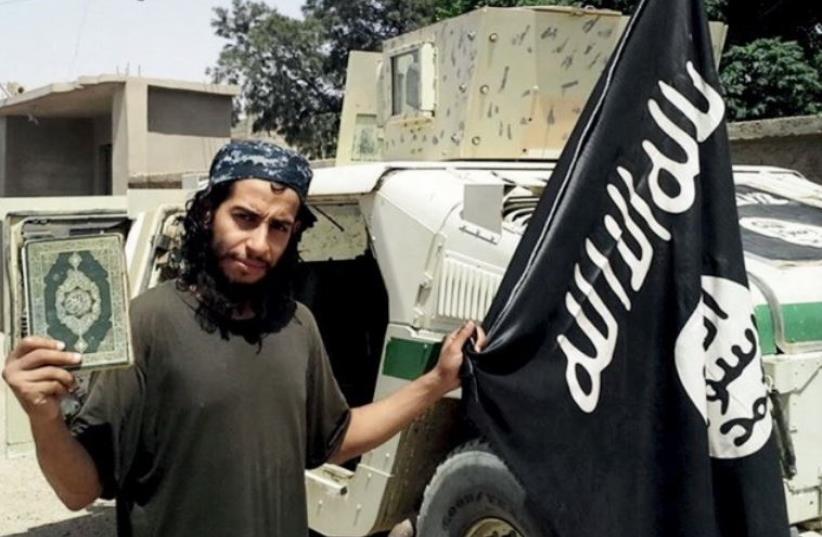 An undated photograph of a man described as Abdelhamid Abaaoud that was published in the Islamic State's online magazine Dabiq and posted on a social media website
(photo credit: REUTERS/ISLAMIC SOCIAL MEDIA)
Advertisement
French investigators cannot yet identify those killed in a police raid on Wednesday but the suspected mastermind of the attacks in Paris was not among those arrested in the operation, Paris prosecutor Francois Molins said.The raid was staged after receiving a tip on Monday that Abdelhamid Abaaoud, who is accused of having played a central role in both planning and executing the attacks on Paris last Friday that killed 129 people, was in France, he said.He was until then believed to be in Syria.
Heavy police presence, helicopters in Paris suburb during shooting raid
"I am not able to give you a definite number and the identities of the dead but there are at least two dead," Molins said at a news conference."I can say that Abaaoud and Salah Abdeslam are not among those taken into detention," he said, referring to the suspected mastermind and a suspected attacker who escaped to Belgium by car early on Saturday morning."A body riddled with impacts was found in the debris of the building. The state of the body has not permitted, at this stage, to identify it," he added. A woman blew herself up with a suicide vest.Molins' statement came shortly after the Washington Post cited two intelligence officials as reporting that Abaaoud was dead.The Post did not provide details, including the intelligence officials' nationalities, and Reuters could not immediately confirm the report.Police fired 5,000 rounds during the early morning siege on the third-floor apartment, leaving the building at risk of collapsing in certain places and slowing down the investigation, Molins said.He said investigators could not identify three men detained in the raid on an apartment in the St. Denis area north of Paris. Overall seven men and a woman were arrested at the apartment or nearby.Abaaoud, a 28-year-old of Moroccan origin, was the best known of more than 350 Belgians to fight in Syria -- proportionately the biggest contingent from Europe -- and in particular of dozens of young men from the poor Molenbeek district of Brussels to take up arms for Islamic State.His notoriety was based on videos on social media and, for the past year, his boasts of mounting attacks in Europe.In a slick online English-language magazine produced by Islamic State in February, Abaaoud, now known as Abu Omar al-Baljiki -- the Belgian -- said he had been in his homeland the previous month planning attacks with two others who had fought in Syria and who died in a Belgian police raid in January.He had, he said, returned to Syria, despite his face having been well known to police thanks to a much-posted video of him driving a pick-up truck towing the bloodied bodies of prisoners.