"We have moved to an entirely new phase in the global terrorist threat and in our homeland security efforts," says US security official after San Bernardino assault. 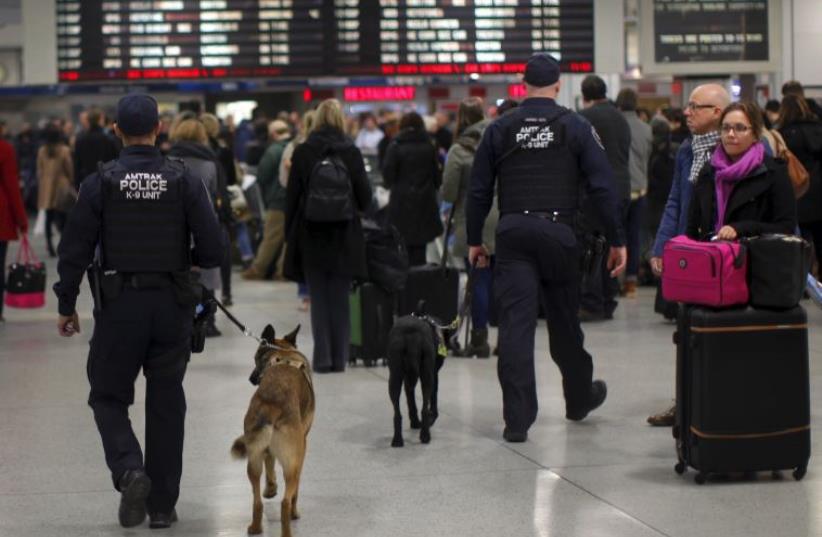 Amtrak Police K-9 teams patrol a busy Pennsylvania Station in the Manhattan borough of New York City
(photo credit: REUTERS)
Advertisement
US officials, faced with an evolving threat of deadly attacks by homegrown extremists, are rethinking their strategy on battling domestic terror after Wednesday's assault that killed 14 people in San Bernardino, Calif., the New York Times reported on Saturday.The United States should beef up airline security by increasing agents in overseas airports, bolster standards for visa waiver programs, and improve communications between officials and Muslim communities to help locate threats, US Secretary of Homeland Security Jeh Johnson told the Times."We have moved to an entirely new phase in the global terrorist threat and in our homeland security efforts," Johnson told the newspaper in an interview. Terrorists have "in effect outsourced attempts to attack our homeland. We've seen this not just here but in other places. This requires a whole new approach, in my view."President Barack Obama will address the nation on Sunday evening to give an update on the investigation into the San Bernardino shooting, the White House said on Saturday.An increase in Muslim voices contrary to extremist propaganda disseminated by the Islamic State is also necessary, the Times said, citing administration officials."We can work with the private sector to get additional messengers with alternative voices out there," Lisa Monaco, the president's counterterrorism adviser, told the Times. "Frankly, we've got to do a better job of approaching this in a way that allows us to - the phrase has been used - break the brand of (Islamic State's) message."