Riot police arrived at the memorial site to confront the protestors who were reportedly chanting anti-immigrant slogans and racist slurs. 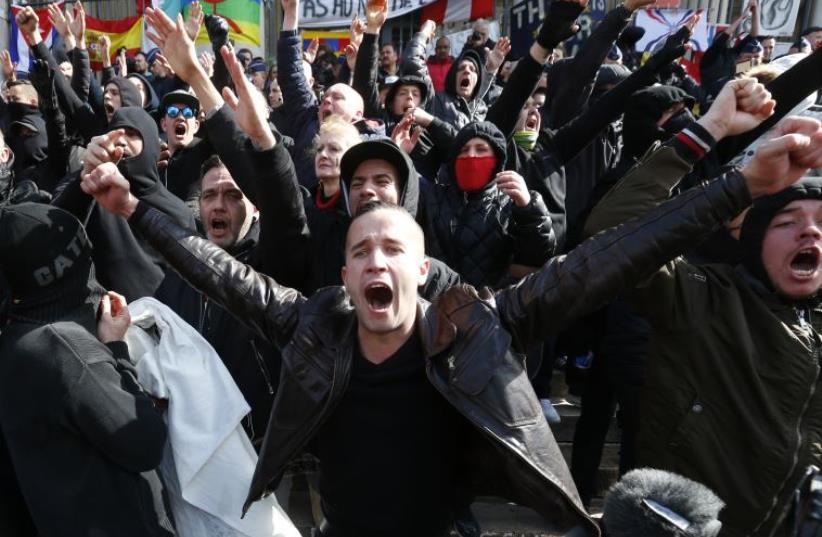 Right-wing demonstrators protest against terrorism in front of the old stock exchange in Brussels, Belgium. March 27. 2016
(photo credit: REUTERS)
Advertisement
Right-wing protesters attending a memorial ceremony in honor of the victims of the Brussels terror attacks were seen giving the Nazi salute and chanting nationalists slogans, CNN reported Sunday.Riot police converged on the memorial site to confront the protestors who were reportedly yelling anti-immigrant slogans and racist slurs.Last Tuesday, a suicide bomber blew himself up at Brussels airport killing at least 14 people and a further blast tore through a rush-hour metro train in the capital shortly afterwards, claiming 20 lives. Other Belgian media outlets have revised the death toll down to 28.The blasts at the airport and metro station occurred four days after the arrest in Brussels of a suspected participant in November militant attacks in Paris that killed 130 people. The metro station hit by the explosion was Maelbeek, close to European Union institutions.The Foreign Ministry said that one Israeli was lightly injured in the attack, and are checking for more injuries.Salah Abdeslam, the prime surviving suspect from November's Paris attacks on a stadium, cafes and a concert hall, was captured by Belgian police after a shootout on Friday.Belgium's Interior Minister, Jan Jambon, said on Monday the country was on high alert for a possible revenge attack following the capture of 26-year-old Abdeslam."We know that stopping one cell can ... push others into action. We are aware of it in this case," he told public radio.Tovah Lazaroff contributed to this article.