Streets turn into rivers of blood from Eid sacrifices in Bangladesh 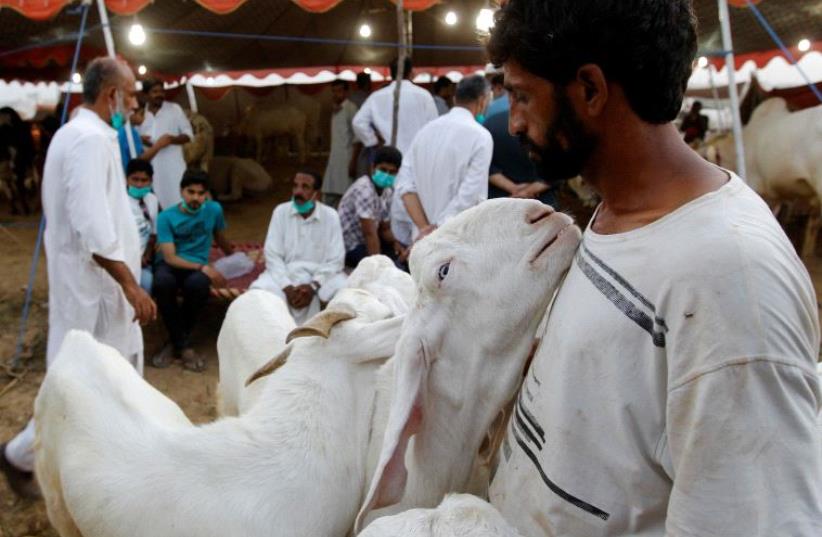 A handler holds his goats as potential customers look after goats to sacrifice ahead of the Eid al-Adha festival at the animal market outside Islamabad, Pakistan September 9, 2016.
(photo credit: REUTERS/CAREN FIROUZ)
Advertisement
As thousands of animals were slaughtered in Banladesh this week as part of the Eid al-Adha or the "Festival of the Sacrifice" celebrated by Muslims, poor drainage and rain waters turned streets in the capital of Dhaka into rivers of blood.Marking the willingness of Ibrahim, or Abraham, to sacrifice his son on God's command, Muslims mark the holiday by slaughtering animals such as sheep and goats. The meat is shared among family and friends and also donated to the poor.


Authorities in Dhaka said that designated sacrifice areas had been established prior to the festival in order for the blood and animal carcasses to be easier to clean, according to the British Guardian.

River of blood in Bangladesh on Eid due to animal sacrifice pic.twitter.com/pgIVUANuQ0
— Rahul Mahajan (@TheRahulMahajan) September 14, 2016


The Guardian quoted Atish Saha, a Dhaka-based artist as saying, “I felt I was walking through a post-apocalyptic neighborhood. To be honest, I was scared. It was an image of mass violence that shouldn’t ever be experienced.”Saha said that it was possible to see families, including infants, wading into the flooded streets to celebrate holiday.ABC news Australia quoted the Dhaka Tribune as saying that the incident illustrated the city corporations failure to maintain drainage systems and paid no attention to the issue before Eid.Reuters contributed to this report.